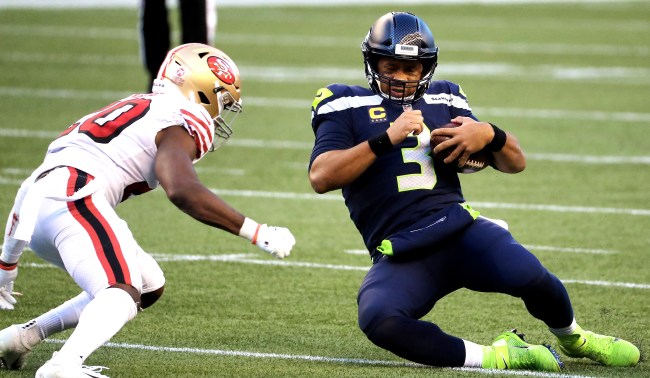 Elite professional athletes are some of the most fit human beings on the planet. There are several reasons for that. One, it’s their job to be in incredible shape. And, two, the best of the best literally have so much disposable income they can afford to do whatever it takes to keep their bodies as fit as possible.

2020 NFL MVP candidate Russell Wilson of the Seattle Seahawks is one of those elite professional athletes.

Despite being just 5-foot-11, Wilson has become one of the best players in the NFL and as a result, by the time his current contract is up, Wilson will have earned over $162 MILLION from his salary alone.

So the fact that he recently admitted to Bill Simmons that he spends $1 million each year to keep his body in top shape is a mere drop in the bucket in relation to his overall financial worth.

Related: 3 Bodyweight Workouts To Keep You Fit, Just In Case Your Gym Shuts Down Again

The 31-year-old Super Bowl XLVIII champion revealed, “I probably spend $1 million if not more, a year, just on recovery.”

“I’ve got two hyperbaric chambers. I’ve got a little bit of everything,” said Wilson. “I get in the hyperbaric four times a week, three times a week. I get treatment every day.”

He says he works out bettwen 363 and 365 days a year with time off only coming for the occasional Thanksgiving and Christmas.

“I’m trying to play until I’m 45, at least,” Wilson explained. “For me, my mentality is that I’m going to leave it all on the field and do everything I can to take care of myself.”

So far, so good. Out of the 135 games the Seahawks have played since they drafted Wilson in the third round of the 2012 NFL Draft, Russ has started all 135 of them and is currently having easily the best year of his nine-year career.