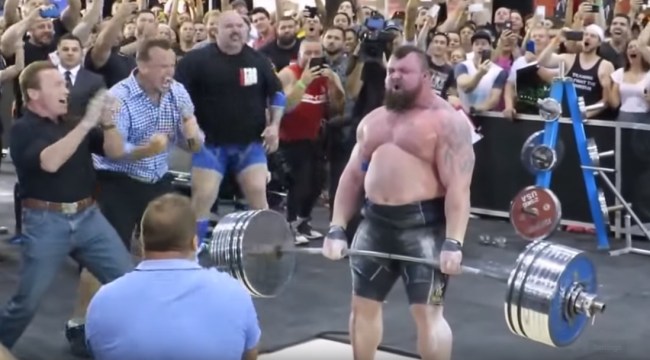 Eddie “The Beast” Hall won the World’s Strongest Man competition in 2017 and has won multiple UK’s Strongest Man and England’s Strongest Man titles. The 31-year-old British strongman also holds the world record deadlift holder, lifting 1,100 pounds. But The Beast was worried about health-related issues and decided he needed to slim down. Eddie lost an incredible 84 pounds by changing his diet and altering his workout regimen.

196kg vs 164kg 2017 Vs 2018 Lots of people asking for comparison photos from my biggest to now, well here it is…. #transformation #backupyourbull #sinkorswim #beast Big Love The Beast

After winning the 2017 World’s Strongest Man competition, Eddie announced that he would retire from professional strongman competition in May of 2017 and return to lower-weight contests. Retiring from the professional strongman circuit allowed Hall to focus on his personal health. At 6-foot-3-inches and tipping the scales at 433 lbs, Eddie decided to make some big changes in his life for the better.

This is what 6ft 3” & 30.5 stone / 425lbs of BEAST looks like…… even have my personal No1 fan that follows me everywhere nowadays! My absolute heaviest I was 433lbs and Jeeze I wouldn’t wish that torture upon anyone. @alphadesignsuk ^ Beast shakers ^ Big Love The Beast Photo credit @zoiephotography

“Once I’d won it [World’s Strongest Man], I’d achieved my life long dream,” Hall told Express. “I knew that I was pushing the boundaries. I knew that I was basically risking my life with all the health factors – it’s very unhealthy being that big.

Hall has dropped over 80 pounds and credits his tremendous transformation to a new diet and adding cardio to his exercise routine. Hall said he “cut out a lot of carbs.” The Beast went on a keto diet. “Diet wise, all I’ve done is basically cut out carbs nearly completely. I’m basically on an all-protein, all-fat diet.”

Hall also modified his gym routine by increasing the amount of cardiovascular training he was doing. “But, what I do now is I’ve thrown in a couple of boxing sessions a week. I do a land-based training session, I do a swimming session, and then I bought a push-bike as well so I’m doing a lot of cycling as well,” Eddie explained. “I’ve probably piled on about five or six hours a week in cardio on top of my weight training.”

Me and @shawstrength having a pose down in @ironaddictslv I totally outangled him so he hid behind the camera… you can see his fat ass in the mirror on the left. The Oblivion is working well 😊 #OBLIVION ☄️ @myoband.teamsnf 👈🏻👈🏻👈🏻👈🏻 New Flavour dropping tomorrow!!!!! #370lbs.vs.450lbs #ItsStillYourMuthaFuckinSet #Transformation #BackUpYourBullshit #SinkOrSwim #xplosiveape #Oblivion #Myo-Band Big Love The Beast

“I feel really good at this weight,” Hall said. “I’ve got a six pack and I’m quite happy to stay at this, until I get a bit older [in his late 40s and 50s], when maybe I’ll have to reduce the weight a little bit more.”

RELATED: Chick-fil-A Introduces Keto Menu But That Means You Can’t Have Some Of Your Favorite Fast-Foods

Despite shedding the weight, The Beast can still lift with the best of them. Here he is bench pressing 485 pounds.

After a chaotic weekend filming in graz and being ill as fuck…. I still came and got shit done this morning’ 220kg flat pause reps and 180kg incline pause reps followed by 1.1/2hrs of assistance and now on a train to Manchester for an acting lesson then a business meeting and then back for a motorcycle lesson tonight. Everyday is full of exciting opportunities right now and although I’m always tired and always wanting to be home with the wife and kids “it feels right”. My strength is increasing very quickly as I convert back to strength training whilst keeping a lean look and if my schedule allows there maybe something big coming in 2020… 👀 Keeping strong and lean with Oblivion ☄️ 💪 Get yours from:- @myoband.teamsnf 👈🏻👈🏻👈🏻 #Transformation #BackUpYourBullshit #SinkOrSwim #Beast #Oblivion Big Love The Beast

Here is Eddie doing “some light reps on the leg press.” Light reps. Congratulation to Eddie Hall on his amazing body transformation and to continued good health, but maybe cut down on the piles of meats covered in cheese.

Some light reps on the leg press 👀 if you buy Muhdo DNA kit through this link:- https://muhdo.com/eddie-hall 👈🏻 (Copy and paste or click link on Facebook) On Saturday 15th December in stoke on Trent… You get to meet me, get free signed merchandise, free supps and a detailed breakdown from me and the team and can chat about anything you like. Early Xmas present for yourself or a friend? #DNA #Science #MeetNGreet #FreeMeechandise #FreeSupps Big Love The Beast