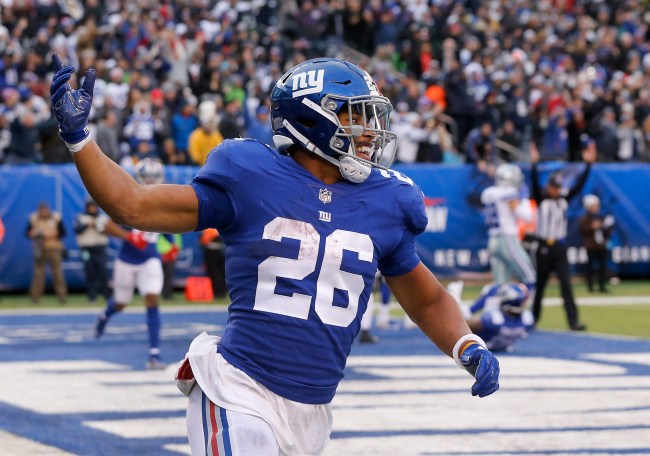 Saquon Barkley electrified the NFL last season, with the 2018 No. 2 overall pick proving that he may be a once-in-a-generational talent by finishing second in the league in rushing yards with 1,307, scoring 15 total touchdowns and making the Pro Bowl. Sure, his New York Giants weren’t great, but the former Penn State start showed flashes of brilliance, which has to give fans hope as they head into the years to come.

With Saquon Barkley already seeing success in the NFL, he knows that, in order to sustain it, he needs to continue to work his damn ass off. As one of the most jacked up and cut guys in the league — have you seen the tree trunks he’s got? — Barkley hasn’t taken much time off to pat himself on the back for last season. Instead, he’s been going harder, faster, stronger this offseason, using an intense workout routine that has, somehow, left him even more cut.

For those wondering what it takes to be one of the best players in the NFL, here’s a little glimpse, because Barkley posted a video showing just some of his daily regimen. Note: This shit isn’t for the faint of heart, so you might not want to just dive in and try it out yourself.

See, told you Saquon Barkley’s been working harder than ever to maintain — and expand on — the success he had during his rookie campaign. And, while it’s impressive AF to see on video, his Giants teammates have been even more blown away with him in person, with a bunch of them describing how wild Barkley’s physique really is.

Here’s what some of Saquon’s teammates had to say, per the New York Post.

“You don’t think he can get any more fit but he somehow did,” said Jon Halapio, a 6-foot-4, 315-pound center. “We only hope to look like that one day. He has the body to show off. I don’t know how it feels.”

That’s some high praise from other professional athletes, isn’t it? While those guys have made it in the league themselves, it takes a special kind of person to work as hard as Saquon Barkley does to stay so fit, which is why he continues to push himself.

“Very proud of my body,” the second-year running back and full-time physical specimen told The Post during a rare break at Giants training camp. “Put a lot of hard work in. I surrounded myself with a great team. Your body is what you need to produce at a high level in this sport, that’s why I take it very serious.”

Earning the nickname “Saq-quads” because of the size of his bulging leg muscles, the second-year running back said that there’s one very simple reason why he continues to build strength in his stems — and it’s a pretty simple explanation.

“Power,” he said. “When I mean power I don’t mean running people over. Powerful being when you hit me, you feel the density and you can feel ‘em and it keeps me moving. Why I’m able to squat so much, why I’m able to do the things I do, why I’m able to make a jump-cut then make another jump-cut over somebody else. All those things comes with flexibility, balance, core stability, mobility in all the places you need to be, especially hips, to be able to bend and move that way, but the power comes from your quads and your hamstrings and your legs and that’s what you have to have as a running back.”

Saquon Barkley knows his work ethic is better than most people, and he’s using it to his advantage in order to separate himself from other running backs in the NFL. And, with his peers just as blown away with his physique as us normal people, it’s clear that he’s doing something right.