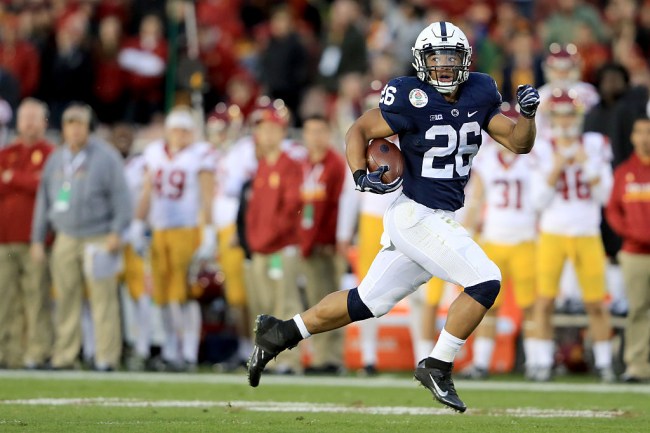 The NFL is filled with impressively large humans capable of running at impossibly quick speeds thanks in no small part to the insane training regimens that players stick to in order to reach their physical peak. Thanks to social media, we’ve recently had many chances to take an inside look at some of the insane workouts football players rely on to compete at the highest level.

In my experience, there’s no better way to humble yourself than to watch James Harrison do his best World’s Strongest Man impression or throw some resistance bands on 150-pound dumbells for the hell of it. If that’s not enough to make you feel bad about yourself then you might also want to check out this recent video of Saquon Barkley casually deadlifting over 300 pounds and doing some box jumps in between just for fun.

Based on that clip, it’s not exactly shocking that Barkley has more muscle than a Ukranian crime boss. However, if you need any testament to confirm just how jacked he is, some recent comments by fellow Giant Eli Manning should tell you everything you need to know:

For The Win shared a clip of Manning’s chat with Simms & Lefkoe where the QB admitted he just can’t help himself from staring at his teammate’s legs.

Here’s the full quote if watching a 45-second video is too daunting of a task:

“His quads are the size of my waist and whole upper body. I’ve never quite seen anything like it. I don’t often stare at another man’s legs, but in that case, you just can’t quite help it.”

Based on what I’ve seen this is 100% justified.