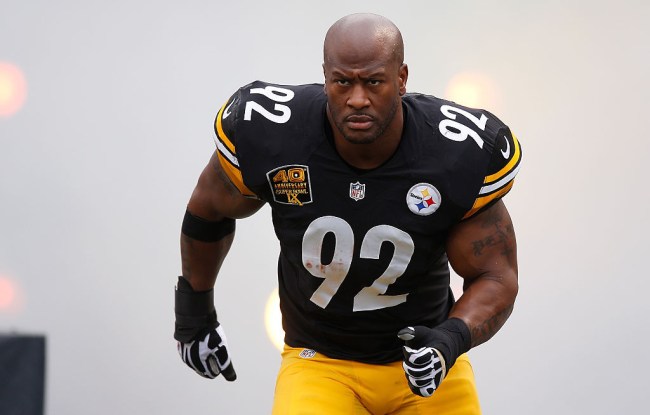 James Harrison officially announced his retirement at the end of last season after 15 years in the NFL, where he was an absolute nightmare for opposing offenses thanks to his ability to be an absolute freak of nature. Despite being 39 years old in his final season, his work ethic never waned, and he treated us to several videos showing off some of the insane workouts he relied on to remain such a dominating force.

Harrison might not be playing football anymore, but if you think that’s going to stop him from showing off his otherworldly athletic ability, you obviously don’t know James Harrison. He’s continued to dominate the gym since leaving the league and shared a video earlier this week that will either make you want to hit the gym or just totally give up on working out because you know you’ll never be able to reach the point he has.

Earlier this week, Harrison threw a video up on Instagram in which he banged out a few reps with a pair of 150-pound dumbbells that he attached to a couple of elastic bands just to make things interesting.

If Harrison is going to keep showing off in the gym like this, he should absolutely film his next video inside of a Planet Fitness. I can say with absolute certainty I would pay at least one dollar to see what happens when the lunk alarm goes off.