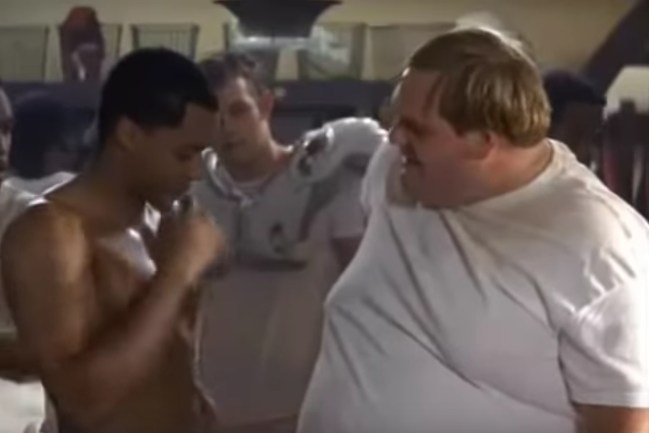 Actor Ethan Suplee recently turned A LOT of heads when he unveiled to the world (on social media) that he’d lost 250-pounds, had gotten jacked, looked incredibly healthy, and was no longer the extremely overweight actor everyone recognized from TV and Movies.

He’s best known for his roles in Remember The Titans, Mallrats, My Name Is Earl, American History X, and plenty of others. Ethan Suplee was a BIG guy. He says at his heaviest he maxed out the scale at over 530-pounds.

Suplee now weighs 260-pounds after yoyo-ing a bit throughout the years. In the clip below, he talks about what made him finally hunker down and lose all that weight and continue to lose weight while getting jacked. He also takes us through his ‘push’ workout that’s helping him stay jacked while losing weight.

He says he’s “focusing now on retaining as much muscle as possible” while he continues to lose weight. Ethan says in order to do so, he has to essentially trick his body into thinking it needs the muscle in order to survive. So while he’s in a caloric deficit, he needs to be lifting heavy weight so his body receives the signals that it needs the muscle and burns the fat.

If you took notice of ‘American Glutton‘ on Ethan’s shirt, that’s the podcast he’s launched. Here’s the description on that:

Actor Ethan Suplee was an aspiring plus size model long before it became trendy and now sets out to examine our current obesity crisis. On American Glutton, he’ll talk to everyone from experts to the average Joe, exploring all the diets he has been on over the last two decades, taking us on his journey from obese to svelte and back again, examining what worked and what made him gain everything back plus 50 pounds. Sharing his ever-lasting search for the next quick fix, we’ll delve into the joys of suffering, relativism, dogged determination, and the proper way to braise a pork belly.

You can click here to find American Glutton on iTunes to check out that podcast yourself.

These two children grew up and made a podcast. New episode of @americangluttonpodcast is out now. @mrkevinconnolly and I discuss the movies we did together, his concerns for my health and how I was mean to Coolio in the 90s. Please enjoy, Sincerely

Excited about this! #Repost @actionparkmediagroup with @get_repost ・・・ American Glutton with @ethansuplee … coming soon 2020!

According to the recent report on his weight loss from EW, it started after they finished filming My Name Is Earl:

“After My Name Is Earl, I started obsessively riding bicycles. I actually did get properly thin at one point — I was nine percent body fat.

I lost around 40 pounds in 2019 cycling. I’ve sent put about 10 of those pounds back on but mostly in muscle. I was never anywhere near his weight but I can testify that cycling is a great way to get in your cardio and lose weight because the terrain and scenery (and music if you want) are constantly changing so you won’t get bored easily. It moves so must faster than running and that’s why I love about it, constant stimuli change.