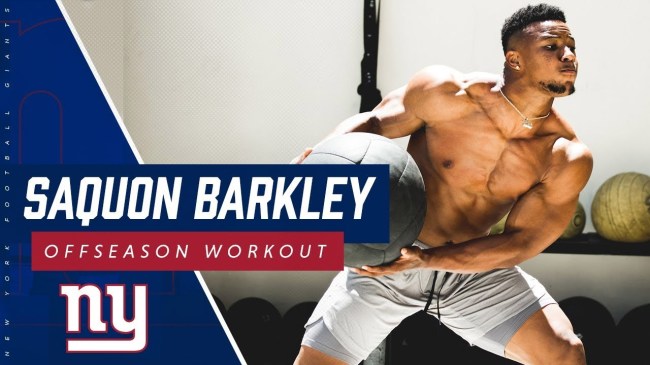 Want to know how Saquon Barkley gained 5,557 all-purpose yards in his three-year career at Penn State, and how he set multiple league and franchise records in his rookie season for the Giants?

Well, it wasn’t because the second overall draft pick in the 2018 NFL Draft was sitting around eating Pringles and donuts. Bro was busting his ass getting his body ready to dominate on the gridiron.

Odell Beckham dubbed Barkley “SaQuads” after seeing him in person at camp following the draft in 2018 and it all has to do with his insane offseason workout and training regimen.

In a video recently released by Barkley’s team, the New York Giants, we get a good look at some of what goes into his demanding regimen.

As Men’s Health fitness director Ebenezer Samuel, C.S.C.S. points out, despite seeing it during the NFL Combine each year, Barkley doesn’t perform that move at any point in the video.

“Take a cue from Barkley and limit how often you attack barbell benching in your workouts. Barkley’s plenty strong, but he’s skipping that glamour lift in favor of dumbbell incline work and several variations of bodyweight pushups,” he says.

And that’s how you make the Pro Bowl and win the AP Offensive Rookie of the Year in your first season in the NFL. Oh, and end up in the ESPN Body Issue before you’ve even played a single down as a pro.