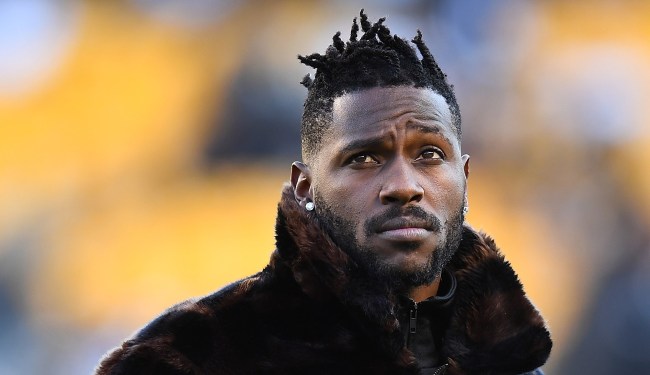 We’ve reported on a lot of different workout regimens over the years. And every so often we come across one that is, how shall I put it, a little outside the box.

The most unusual workouts we’ve seen in the past involved NFL running back and athletic freak of nature Alvin Kamara.

The video of Kamara performing a stability exercise drill that he posted back in April is so insane that even left guys like LaDainian Tomlinson and Aqib Talib gobsmacked.

Now, over the weekend, new Oakland Raiders wide receiver Antonio Brown took some time out of his busy schedule of blasting Madden NFL 20 game producers and buying a quarter of a million dollars worth of jewelry to post a video of himself prepping for the upcoming NFL season with what can only be called a very different kind of workout… catching bricks.

“The product is coming September just wait on it……….. #raidernation,” Brown captioned the video on Instagram.

While impressive, I guess, aren’t there easier, more effective ways to increase hand strength and reflexes than this? Then again, those other exercises probably don’t look as nearly as impressive on social media.

Others? Not so much.

Correct preparation for the bricks that his QB will release...

Raiders bruh... you play for the Raiders

That shit will be handy finishing last in yo division #wastedcareers

Just a reminder you play for the Raiders , enjoy last place

Be sure to not throw anything out those windows