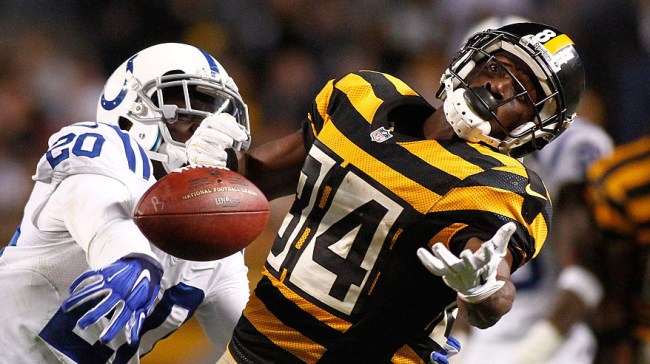 Pittsburgh Steelers star wide receiver Antonio Brown is being sued for allegedly throwing furniture off a 14th story balcony in a fit of rage and almost hitting a 22-month-old toddler.

Brown is facing two lawsuits in Florida (natch) filed by one Ophir Sternberg, according to KDKA 2 CBS Pittsburgh.

A lawsuit filed by the victim contends two very large vases, an ottoman and other pieces of furniture landed just feet away from the child and his grandfather.

It goes on to say surveillance video clearly shows objects falling from the balcony and nearly striking the two people on the ground.

Brown was said to be “extremely agitated, acting aggressively, and yelling at security personnel” when police arrived.

The second lawsuit related to the incident was filed by the landlord of the building over damage to the unit and furniture.

“Apparently, there was dome kind of altercation in the unit, which led to him throwing a vase off the balcony – it’s the 14th floor – off the balcony and this 3- to 4-foot vase, by good fortune, fell into the hot tub and there was nobody in the hot tub,” stated the landlord’s attorney George Minski. “When the police arrived, they described that there was broken mirrors, broken tables, other pieces of furniture were broken. The condo association then ordered Mr. Brown to vacate for violating the rules. When he vacated, the owner went back in and it looked like there had been a real large college party in the unit.”

Brown reportedly initially agreed to pay for the damages, but never did, thus the lawsuit.

According to TMZ, who has obtained multiple police reports related to the incident, Brown had previously told police that $80,000 cash and his 9mm gun were stolen from his apartment in Miami.

The next day was when Brown went on his alleged furniture-throwing tirade.

TMZ also reports that the whole thing was captured on surveillance video, so expect that to hit the internet in 3… 2…

The Steelers have said they will not be commenting and Brown is also being mum on the situation.