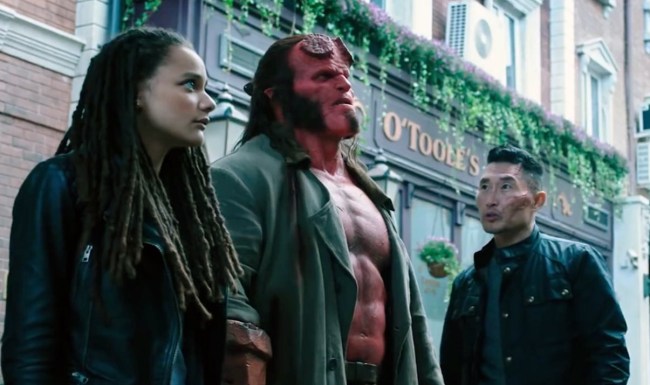 David Harbour may love his dad bod, but in order to play Anung Un Rama, better known as Hellboy, he was simply going to have to put down the donuts.

So how does a guy who once said “…people who eat organic chicken all day and spend nine hours at the gym. That’s not a society that I really care about” go about getting swole for the role of Hellboy?

Here’s some of what he had to say…

The prosthetics helped Harbour get into character to a certain degree, but Saladino says the actor needed more than makeup to really take on the persona of the rough and tumble demon he was portraying. “He had to feel like he was able to kick some ass, and walk on the set and feel like Hellboy,” the trainer shares. By the end of their 9 week program, which was designed to emphasize athleticism and hone functional movement, Saladino says that he had prepped Harbour to feel ready to suit up and run through a brick wall.

And here’s one of Saladino’s workouts with Harbour out of a whole program that Saladino will be publishing in a guide.

Warm Up
Perform 2 full rounds of the warmup circuit, with minimal rest between each exercise.

• Lateral Bear Crawl
1 set of 5 crawls in each direction

Suit Up Circuit
This circuit is all carries, so you’ll need a set of kettlebells or dumbbells. The first few rounds are composed of overhead moves, so be careful with the weight—but once your arm position is lower, you can really get heavy. Walk for 25 yards for each position, and switch arms for each that has you holding the weights in offset positions.

Saladino further explains how he was able to turn Chief Hopper into Hellboy in the video below.

Read more about this workout plan over at MensHealth.com.