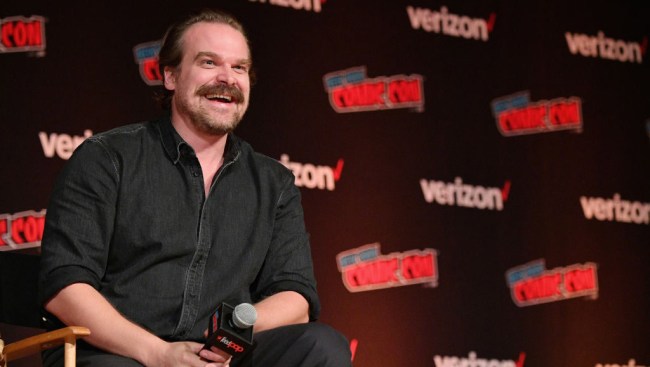 2019 will mark 20 years in the acting business for David Harbour, appearing in TV shows like The Newsroom, Elementary, and Manhattan, and in films such as Quantum of Solace and Revolutionary Road.

But it was his role as Chief Jim Hopper on the Netflix hit Stranger Things that turned Harbour into a household name. That, and his hilarious presence on social media.

Now, in addition to the third season of Stranger Things, Harbour is gearing up to promote his upcoming Hellboy movie where he plays the powerful comic book demon.

As such, he was recently interviewed by CNET and one of the things he was asked about was his “dad bod” – something he says he works on with intense “donut training.”

Merriam-Webster turned the clip of you dancing into the definition of dad bod. Do you consider that an honor?

Oh my God, my God, my life. [Laughs] It was an honor. I have a funny relationship with this dad bod thing. I sort of love it and the reason why I love it is actually very serious. I do think that in a certain way, I’ve become a bit of a sex symbol for our time — there are articles about people digging Hopper. But I’m also like a little big and a little chubby. I love the idea of real bodies on television. And I love the idea of making real people beautiful and loved.

I think Hopper is so loved and he’s got a real body like I have a real body. I’m sick of these bodies on television that are impossibly thin — and the guys train for months and months and then they even stop eating a couple of days before and dehydrate to look a certain way. I want people to feel good in their bodies, like I’m sick of twigs on both ends of the spectrum, men and women. I’m totally tired of twigs.

This man, right here, is most definitely a hero, folks.

In 'dad bod,' the word 'dad' is technically still a noun. 'Daddest bod,' however, would make it an adjective. https://t.co/m7CyzRLgnH pic.twitter.com/2LnmL1SBnT

Harbour also said that despite BEING a meme many times over (see tweet above), he doesn’t really know what a meme is.

Do they have a strict definition of what a meme is? The one I like was my hair person on Stranger Things took a lovely photo of me in a Christmas sweater and my Hopper uniform that was too tight for me, and I looked ridiculous. I was holding my hat a certain way. That got Photoshopped onto covers of Vogue, in a Michael Jackson video — just lots of different places.

Then, of course, the dancing thing. There was me dancing to all sorts of different music, which I really liked. You know, as a serious actor, which I feel like I am, I take my work very seriously, I feel like I should be against this in some way. But I just think it’s hilarious and I love every minute of it.

He also mentioned that, at first, Stranger Things producers really didn’t like his iconic sheriff’s hat.

They were very against it. They just didn’t think it fit. They didn’t think it looked good. I was inspired somewhat by Gene Hackman. I had heard he works a lot with hats. He’s always finding a hat for a character — that pork pie in French Connection. I love that.

So we found this hat. I had to go, “Just trust me on it.” And then, once we started shooting with it, they really got into it.

Read the rest of the very interesting interview with Harbour, where he talks about Hellboy, social media, his childhood, his favorite piece of tech, and more, over at CNET.com.