David Harbour Says He’ll Officiate A Wedding In A Hellboy Costume In Exchange For 666,000 Retweets 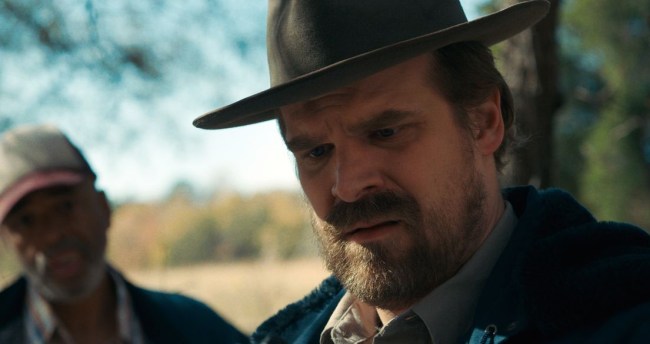 In the past year or so, David Harbour— who plays the role of Jim Hooper on the Netflix hit Stranger Things— has established himself as a social media genius by harnessing Twitter to make a number of dreams come true.

In January, Harbour kicked off a campaign to get Greenpeace to send him to Antarctica to dance with penguins and managed to get the internet to retweet his message over 200,000 times on his way to making his dreams come true.

Harbour eventually made his way to the bottom of the Earth and extensively documented the trip, which included delivering on his promise to do the Hooper Dance with his new friends.

https://t.co/29mTHvLYOA
here's a petition to create the largest protected area in the world.@Greenpeace has 1M sigs.
let's give them 1.8.
1.8 million.
1 for every proposed square km
for the 'guins.
here's me dancing with them,
as promised.
they don't have netflix.@Greenpeace ? pic.twitter.com/jjLBk2XOIr

Harbour also proved he’s a master of Twitter after a fan reached out to him to see what it would take to get the actor to officiate a wedding while wearing his costume from the show.

What would it take to get @DavidKHarbour to be the Officiant at my wedding in September?!

125k retweets. Provided date works with s3 shooting schedule, I will get ordained and perform ceremony. I get to read an esteemed love letter of my choosing, and after the cake is officially cut, I get the very first piece. #allthecakes https://t.co/rSku8qD7uT

The people of the internet helped the fan surpass this goal and Harbour made good on his word last month when he donned his uniform and wed the happy couple.

Hey internet. I know it’s been awhile. I retreated. Needed some space. You probably get it. But I’ve been thinking about ya in the interim. And all your retweets. And so me and some fun folks in Springfield, Illinois made good on our promise we made all those months ago. pic.twitter.com/fZK8zNMQSi

Now, Harbour has issued yet another challenge to the internet after a fan reached out to see what it would take to get him to preside over a ceremony while rocking a Hellboy costume— a request which garnered the perfect response after the recently ordained minister set the bar at 666,000 retweets.

666k
Of this tweet.
Big Red officiates. Full Gear. In his saintly best.
Impossible number?
Think of how difficult it will be for me to get this character ordained by a Christian church😈🙄
(P.S. – I’ll knock off 500k if you can get @artofmmignola to read a poem at the service) https://t.co/cnzHrcnsOo

It’s certainly a bit ambitious but Spencer caught a major break after Hellboy creator Mike Mignola agreed to read a poem under one condition.

absolutely but @DavidKHarbour needs to write the poem!

As of this writing, Perry still has a bit of a way to go as he’s only managed to garner around 21,000 retweets so far.

However, if Harbour has taught us anything with his past campaigns, it’s that you should never underestimate the power of the internet.