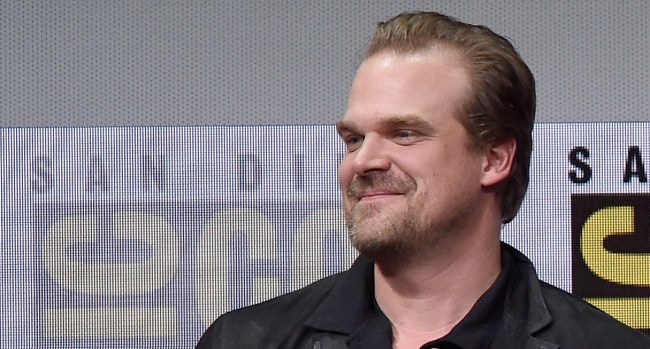 Actor David Harbour’s career has exploded since he landed the role of Sheriff Jim Hopper on Netflix’s Stranger Things>. After playing the father figure to Eleven on Stranger Things, David Harbour has somehow morphed into the de-facto ‘Internet Dad’.

The dude’s been very active on Twitter lately. He’s got over three-quarters of a million followers on Twitter. He recently offered to officiate a fan’s wedding if they got 125,000+ retweets (they did, and he’ll officiate). He also appeared in a fan’s yearbook photos after they got enough retweets. Do you kind of see where this is heading?

David took to Twitter yesterday with a request: he needed help from fans. David tweeted at Greenpeace and asked how many retweets it would take in order to be invited on an Antarctic expedition to go see penguins in real life. Greenpeace actually responded and said that Harbour needed 200,000+ retweets. So David asked his fans and followers for help and the Internet delivered within a matter of hours.

Here’s how it all went down (via Twitter Moments):

Hey @Greenpeace , how many retweets to send me someplace to tell emperor penguin couples I think they have terrific parenting ideologies? Perhaps hone the Hopper dance with the males…

Hmm, if you get over 200k we’ll ask the Captain if you can join our expedition to the Antarctic and dance with the penguins. #StrangerThings have happened https://t.co/qT78aIcKOw pic.twitter.com/LmmLceE17J

Internet…
It took ya less than 5hrs.
I’m a little shaky n sweaty,
Heart pounding.
I’ve never said this to a multi-user weblike platform of tons of computers connected worldwide, but…
Internet…
I think I love you
❤️
Hey @Greenpeace , your move…

Well, @DavidKHarbour, chief mate Fernando just made it official. Get your dancing shoes on, because you'll be heading to the Antarctic in no time.

The 'guins are here waiting for you.
🐧💙🐧 pic.twitter.com/0FSJedAG0m

Hey @greenpeace, just in case you need more convincing on taking @DavidKHarbour to Antarctica I've drawn up a very convincing illustration on how the penguins would benefit. #HoppertoAntarctica pic.twitter.com/jCCO4mNXhw

Fernando, thanks for protecting vital unheralded ecosystems in super cold places and everything but please leave the dancing to the professionals…🙄

If you’ll excuse me. I gotta get some snow pants. https://t.co/s00z5abrZK

Boom. 320K+ retweets for Sheriff Jim Hopper. He’ll soon be doing the ‘Harper Dance’ with penguins in Antarctica on the next Greenpeace expedition.

I’m a little skeptical here and part of me thinks this was all planned. I feel like they knew they were going to get the retweets and this was some publicity agent’s brilliant plan to get David Harbour a bunch of new Twitter followers, but I really don’t care. I’m just stoked that he gets to go see penguins. And I’m jealous because a trip to Antarctica is a definite bucket list item for me.