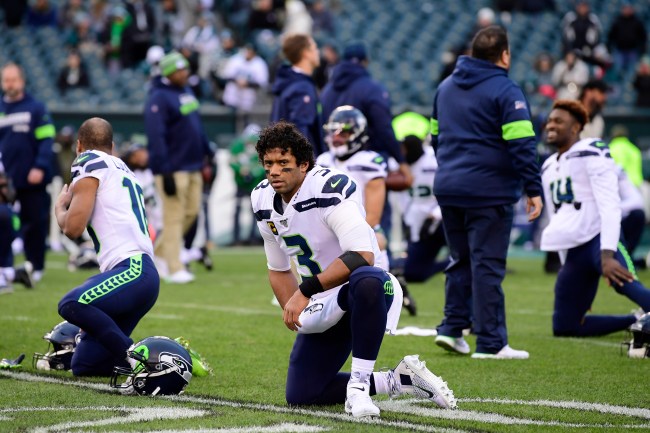 Patrick Mahomes and Lamar Jackson are getting all of the love when it comes to the best quarterback in the NFL conversations. You certainly can’t blame the majority for circling those two names, but it’s time to put some respect on Russell Wilson’s name.

The Seahawks’ gunslinger has Seattle off to a 3-0 start this season and has put up some unbelievable numbers along the way. He’s had two straight games with five touchdowns and his 14 passing touchdowns this season breaks Mahomes’ record set in 2018 for the most TD passes in NFL history through a team’s first three games.

Wilson’s 14 passing touchdowns are four more than any other QB in the league, his passer rating of 139 is the best in the league, and his completion percentage of 76.7% sits only behind Philip Rivers and Lamar Jackson among starters in the NFL. To say Wilson is playing at an insanely high level would be an understatement.

It’s not like Wilson is flying under the radar by any means, he’s always been regarded as a top QB in the NFL, but with these numbers, it’s nearly impossible to argue against the idea that he’s the best signal-caller in the league at this point of the season.

“He’s just on it,” head coach Pete Carroll said. “You’re watching a great football player do what he does best. I’m just really excited about what happens next time we go out.”

Another factor in all of this is that Wilson has had to be this elite for Seattle early on this season. Its defense has given up 25+ points in each of the first three games, so Wilson has had to step up in key moments each week to pull out a W.

It’s unlikely Wilson can keep up this sort of pace throughout the season, but it’s certainly going to be fun to watch him try.