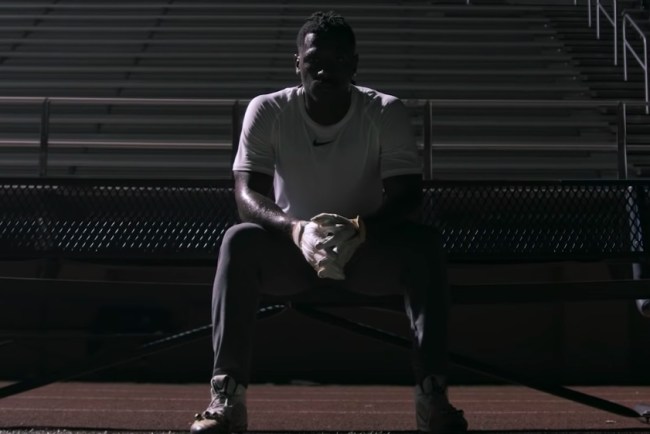 It’s been less than a month since Antonio Brown was released by the Patriots after New England decided to take a chance on him after his time in Oakland came to an abrupt end only to almost immediately regret that decision after multiple women came forward and accused him of sexual misconduct.

The wide receiver quickly found himself with plenty of free time on his hands (and without tens of millions of dollars he’s currently trying to recoup) and he’s spent far too much time on the internet since his release while lobbying for his “freedom” and bragging about shit no one should ever brag about.

A couple of weeks ago, AB posted a video to YouTube in which he reflected upon his recent trials and tribulations and showed he was still hard at work as he attempts to make his way back into the league.

On Tuesday night, he made his grand return to the platform with a new hype video that appeared to be filmed under the lights at a random high school, where he runs routes, catches passes, and poses dramatically for effect.

Now, it’s very clear Brown would like to return to the NFL sooner rather than later and there are plenty of reports that there are teams who would be willing to take on his talents despite the allegations against him.

However, it’s very unclear if the league will allow him to suit up, as investigators seemed to be dragging their heels when it comes to speaking to him about the accusations, and while he hasn’t been placed on the commissioner’s exempt list, all signs point to this being a de facto suspension.

All I know is that this is certainly not the last we’ve heard from Antonio Brown.