Antonio Brown Is Getting Annihilated By The Internet Again, This Time For Tweeting ‘Free AB’ 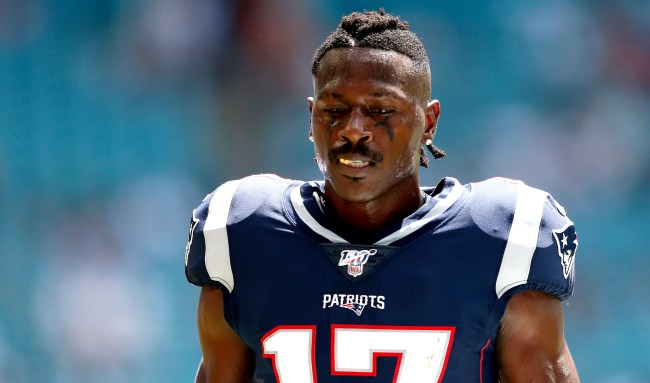 Antonio Brown made another stop on his roadtrip to obscurity Tuesday morning. The 31-year-old unemployed wide receiver who would reportedly like to get back on a football field for an NFL team sent out a tweet that read “Free AB.”

According to ESPN, sources tell them that Brown has continued to train and hopes resolve his many off-field issues so he can have his playing status restored in the next few weeks so he can sign with an NFL team.

Brown is currently involved in five reported lawsuits, including a new one that was re-filed against him in Florida by the woman who accussed him of sexual assault and essentially led to his release from the New England Patriots after just one game.

Since his release, Brown has repeatedly said he still wants to play in the NFL (but not the XFL) despite claiming that he would “never” play for any NFL owners again.

He has also gotten into a feud with Shannon Sharpe, announced he is going back to college, beefed with Nike, got into a Twitter fight with Eric Weddle and Golden Tate, got into it with Baker Mayfield, made attempts to get the $61 million he believes he is owed, reportedly acted like a “belligerent child” in a deposition, and pissed off numerous fantasy football fans on Twitter.

And despite all of that, as of October 12th, the NFL has still yet to interview him.

So, as one can imagine, Brown tweeting “Free AB” on Tuesday did not go over very well with NFL fans on the internet.

But...... you already are. pic.twitter.com/CWNfXmljmk

“AB How is your season going?” pic.twitter.com/yLqWxKExCg

The Patriots and Raiders already did that.

Turn in that English paper first.

Remember that time you had ALL those millions in guaranteed 💰 from a team that wanted you. Players that cared/respected you. A coach that loved you and had your backb and designed plays to show your greatness.
... Yet that wasn't enough for you. #Freedom pic.twitter.com/qjHpgUVWSY

Jesus, just shut the fuck up.