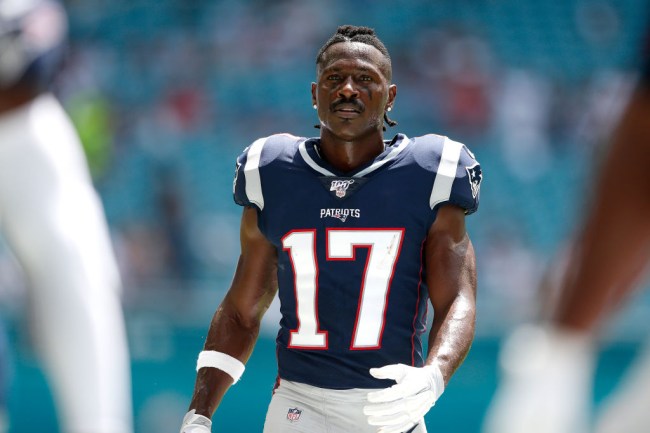 After his time in Oakland came to a tumultuous end, Antonio Brown got a second chance after signing a contract with the Patriots only to see it thrown out the window like furniture tossed off the balcony of a condo when he found himself embroiled in a sexual misconduct scandal.

While it appeared the New England was willing to turn a blind eye to the accusations against the wide receiver, things came to a head when one of his accusers released the threatening text messages he sent her and Brown was ultimately released by the team.

He initially took the news in stride and thanked the Patriots for the opportunity but things took an interesting turn a couple of days later when he fired a shot at Robert Kraft for getting a handy, which may or may not have led to New England deciding they wouldn’t be giving him his signing bonus (although people in the know believe he’ll ultimately get his hands on the money).

Brown has had a wild couple of weeks since he was ordered to testify about the aforementioned condo he allegedly trashed, as he filed a record number of grievances against both the Raiders and the Patriots in pursuit of the $61 million he feels he’s owed in addition to feuding with Baker Mayfield and reportedly throwing a temper tantrum in the courtroom.

Given the circumstances, you’d think the last thing Brown would want to do is return to New England, but based on what he said on Instagram Live on Wednesday, it appears he’s more than willing to get back with his ex-team if they’re willing to have him.

.@AB84 Antonio Brown: "If you guys follow the Patriots, tell them to call me, they still gotta pay me so might as well let me earn it." pic.twitter.com/w1xxr8brwv

During the live stream, Brown also said he’d never play in the XFL if given the chance, which he won’t be, as the rebooted league has made it very clear they don’t want to be associated with him.

It’s also worth noting the NFL is taking its sweet damn time investigating the allegations against Brown and there’s no indication he’ll be welcomed back to the league at any point this season even though some teams have expressed interest in signing him.

However, something tells me this isn’t the last we’ve heard from Antonio.