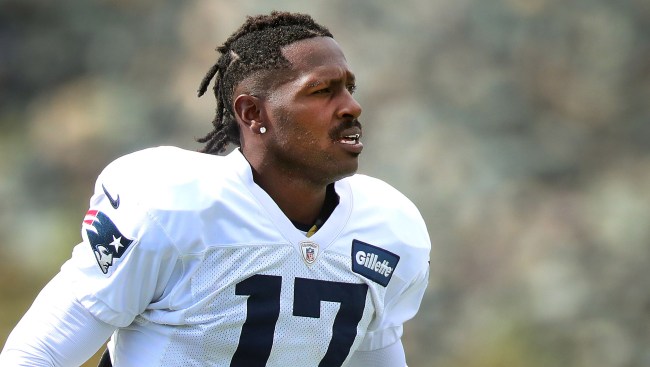 In case you missed it, and that’s a real possibility considering all of the other bad news surrounding Antonio Brown, the former Steelers/Raiders/Patriots wide receiver is spending part of his Tuesday sitting for a deposition in a lawsuit.

This one is for allegedly damaging an apartment and not paying for it. Specifically, the apartment in a whole different lawsuit (yes, another one) where he was accused of almost hitting a 22-month-old toddler with furniture thrown from the 14th story balcony of a condo he was renting.

AB arrived for his deposition on Tuesday morning with his agent, Drew Rosenhaus, by his side — along with his attorney, Darren Heitner.

The former New England Patriots star was dressed in a black tracksuit and was smiling and using his phone to record the media throng waiting for him as he arrived.

In other words, he didn’t seem worried at all.

As a result of this lawsuit, footage of Brown’s alleged tirade, which involved someone tossing furniture from the 14th floor of the condo complex, has now surfaced.

In the video obtained by WSVN, at least four large things are seen falling from the sky into the complex’s pool area as people look up and begin running for cover.

Damage to the condo can also be seen in the WSVN video, including holes in the walls, an upturned table, and a destroyed chandelier. Brown is being sued for the damage, repairs, and lost revenue as a result of the repairs taking place.

Brown reportedly settled the lawsuit by the family of the toddler who was almost crushed by flying furniture after claiming that it was someone else throwing the items, even though police who were called to the apartment stated AB was “very agitated” and yelling when they got arrived on the scene.

“When police got there, Mr. Brown was extremely agitated and was being restrained by a trainer,” said George A. Minski, the attorney who represents the the 47-story hotel and condo, in a phone interview.

Looks like we know how Brown will be spending much of that newfound free time he has on his hands that Randy Moss was so concerned about the other day.