Randy Moss Issues Scathing Message To Antonio Brown, Warns Those Close To AB To Watch Out 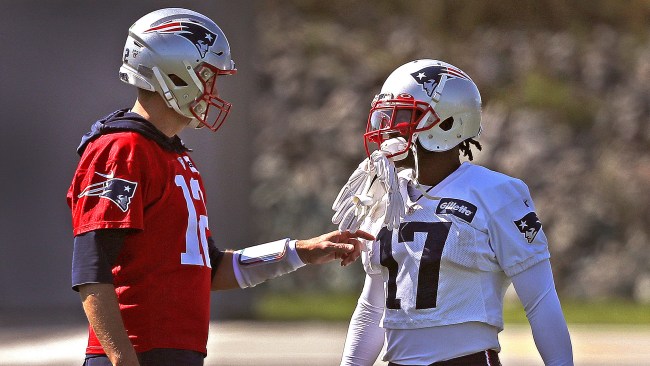 When Randy Moss, of all people, is telling another wide receiver that they’re out of control in their handling of issues on and off the field, you know that athlete, in this case Antonio Brown, has gone off the deep end.

After being released by the New England Patriots after just one week, Brown took to Twitter on Sunday to inform the world that he is done playing in the NFL. (Which could be a problem for him since the XFL has already said thanks, but no thanks. Is the Arena League still in operation?)

During Sunday’s NFL Countdown on ESPN, Sam Ponder asked Randy Moss if he was buying Antonio Brown’s claim that he’s done playing in the NFL. (As of Saturday, pre-tweets, there were reportedly still three teams interested in him.)

“Him saying that he’s done, that’s him saying that, but what does the National Football League say? And there’s one thing that really stands out to me, and it’s I’ve been saying for the last couple of months about just shutting up and playing football,” said Moss. “Now, you’re here at home tweeting on Sunday. That’s our day to go out there and do what we love to do. And you’ve been to Pittsburgh, you’ve been to Oakland, you’ve been to the defending Super Bowl champions, New England Patriots. Now out of all those three places you’ve been, up to today, where is the accountability for his actions?

“And so, I think from a player looking at another player of Anotnio Brown’s caliber, it’s very frustrating to see everything that’s going on now. It’s like we’re sitting here glad that he’s not on the football field. You know? I’m speaking from a teammate [perspective], I would not want to come in on Sunday or come in during the week and we cannot focus on the game of football, and now that he doesn’t have football, the people around him close better just pay attention to him and keep him close.”

That last point is a good one. Brown is going to have absolutely nothing but free time on his hands when normally this time of year he would be completely immersed in playing football.

What happens next with him is literally anyone’s guess.