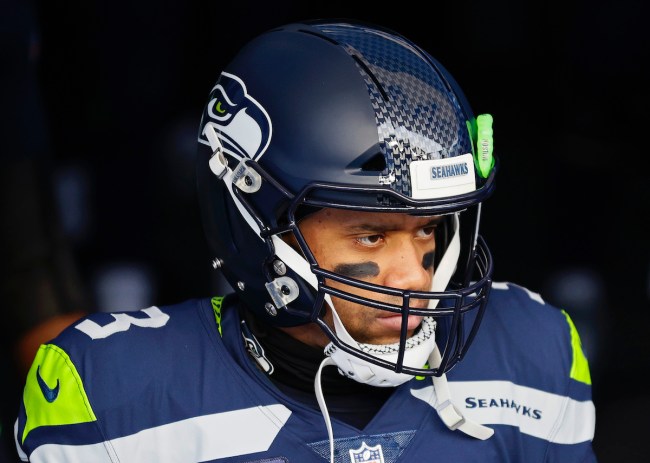 There is no way in hell that Russell Wilson and the Seahawks are headed for a divorce, right? As somebody who lives in Seattle and has watched the franchise have success with their star quarterback since 2012, those are the words I keep asking myself as this wild NFL offseason begins. Unfortunately, the answer continues to get foggier and foggier, because the once unthinkable may actually happen if things continue down the path they’re currently on.

Of course, that’s only if you pay close attention to the recent reports floating around involving the two sides, with Wilson voicing his displeasure with the franchise for firing Brian Schottenheimer this offseason, the team reportedly getting trade inquiries about the quarterback’s availability, and Russ firing off an awkward reply when asked about said inquiries. Right now, this relationship is a mess, and a new report just made it even messier.

According to Dan Patrick, Russell Wilson’s gone and made the Seahawks’ leadership all sorts of upset for using the media to voice his displeasure about some of the early moves the team has done this NFL offseason. Patrick even went as far as describing Seattle’s front office as “not happy” when discussing the signal-caller’s decision to make things public — something the quarterback has always avoided doing.

Here’s the real kicker, though: Patrick added that, at this current pace, things are “unsustainable,” and that one must wonder if the two sides can co-exist and move beyond these little offseason problems. Take a look/listen below.

"You wonder if they're going to be able to co-exist… the current situation is unsustainable. That's what I was told." pic.twitter.com/OOrP4oMM3Z

Russell Wilson is, arguably, a top-3 quarterback in the NFL, so this is gigantic news, guys. After signing a massive contract extension in 2019, it seemed like the guy was happy with the Seahawks’ direction and ready to ride for the next decade or so. But now all these reports are coming out about sides being unhappy and, boom, we’ve got heavy rumors on our hands.

Now, look, Wilson has every right to voice his displeasure with some of the things the team has done this NFL offseason, namely firing Schottenheimer. The expectation might be that Wilson has always avoided doing so publicly, but, look, if he felt like the decision was a bad one, posting a little something on Instagram isn’t going to do much harm. It seemed like what happened after all that really started rocking the boat.

It’s still February and things are tense AF between Wilson and the Seahawks, so, while Seattle fans should be worried, there’s plenty of time to repair some (or all) of this before training camps open in July. Head coach Pete Carroll and Russ have always had a great relationship, so odds are high that they have a Kumbaya session to smooth things over. Well, that should be the hope.

We’ve already seen absolute craziness this NFL offseason with star quarterbacks being traded for one another, so who knows if Russell Wilson’s the next one to be sent packing? The odds are slim, but the body language and drama is very real right now, so, I guess, anything’s possible.

I’m hearing Russell Wilson’s camp has grown increasingly frustrated by the Seahawks inability to protect the 8 time Pro Bowler. He has been sacked 394 times in 9 seasons. This situation warrants serious monitoring.

Wilson isn’t the type of guy who brings attention onto himself, so here’s to thinking he and the team smooth things over. But he’s also never really demanded much from the franchise, other than setting a deadline for his contract extension a couple years back, so maybe he really is fed up with the team ignoring the offensive line issues or some of the coaching fires/hires, and he’s trying to shake things up in order to keep the pressure on the Seahawks to stay aggressive this offseason?