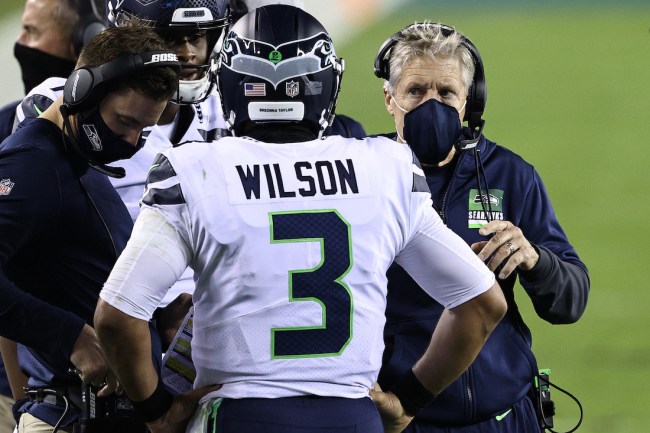 In my personal opinion, Russell Wilson is one of the top-3 quarterbacks in the NFL right now. Maybe that’s because I live in Seattle and get to see him every weekend during the season, or maybe I’m just biased because I hopped on the Seahawks’ bandwagon the year I moved here — which coincided with when the franchise drafted Wilson — but it’s hard to really describe how much of an impact this guy makes.

Like, if DangeRuss isn’t passing the ball, he’s literally running around like a chicken with his head cut off avoiding defenders and extending plays. It’s remarkable he’s so agile, and even more incredible that the signal-caller has never been injured or missed time during his career — especially when considering how pathetic the offensive line has been since joining the Seahawks in 2012.

But here’s the kicker: Just because Russell Wilson is really good at avoiding behemoth defenders pummeling him into the ground doesn’t mean he actually enjoys doing so. So excuse the quarterback for being a little salty about the lack of protection he gets from his O-line, which is something his inner circle is reportedly pretty upset about, per CBS Sports’ Jason La Canfora.

I’m hearing Russell Wilson’s camp has grown increasingly frustrated by the Seahawks inability to protect the 8 time Pro Bowler. He has been sacked 394 times in 9 seasons. This situation warrants serious monitoring.

Assuming La Canfora’s sources are legit, that report shouldn’t really come as a huge surprise to many people, because the Seahawks have been playing with fire when it comes to protecting Russell Wilson over the years. It makes sense that the quarterback might be a little frustrated — he just avoids complaining about things publicly — and has every right to put the pressure on the organization to address the issue while the team’s still a perennial playoff contender.

But here’s where things get really interesting (and scary) if you’re a Seahawks fan: Wilson doubled down on his perceived frustration with the franchise during an appearance with Dan Patrick on Tuesday morning.

For those out of the loop, there were rumors this past weekend that Seattle has received calls about Wilson’s availability in a trade this NFL offseason — which is, technically, just a couple days old at this point. When asked by Patrick about those reports, the Pro Bowler seemed (surprise!) frustrated.

“I’m not sure if I’m available or not. That’s a Seahawks question.”

“I definitely believe they’ve gotten calls,” Wilson said regarding potential trade inquiries. “Any time you’re a player that tries to produce every week and has done it consistently, I think people are gonna call for sure. I think that’s part of the process.”

Another part of the process is winning. Wilson wants to do more of it.

“At the end of the day, you want to win,” Wilson said. “You play this game every day to wake up to win. You play this game to be the best in the world. You know what I hate? I hate sitting there watching other guys play the game.”

Russell Wilson on if he thinks teams have called the #Seahawks about trading for him: "Yeah I definitely believe that they've gotten calls for sure." pic.twitter.com/LYA5JVxOvr

It’s never a good sign when a player of Russell Wilson’s caliber shows this type of body language and tone when answering a question about being traded this NFL offseason. For all that he’s given the Seahawks and the city of Seattle, he (rightfully) should feel disrespected that his name would even be mentioned in the rumor mill.

This seems to be a recurring theme for Wilson and the franchise in the past couple months, as the Seahawks replaced Brian Schottenheimer as offensive coordinator this offseason — a move the quarterback was not a big fan of. Throw in the reported frustration with the offensive line and the trade rumors and, well, things seem a little bit tense right now.

Russell Wilson wants to win Super Bowls, not just reach the postseason each year. Every all-time great shares that same sentiment, so good on the quarterback for continuing to put pressure on the Seahawks to get better each year. But the usual silent superstar has been speaking up a lot more lately, and in an NFL offseason where (seemingly) anything can happen, the Seahawks better mend fences quickly to make sure they put out any possible flame from burning the whole thing down.