Russell Wilson-Seahawks Drama Gets Juicier, With QB Reportedly Storming Out After Ideas For Offense Were Dismissed 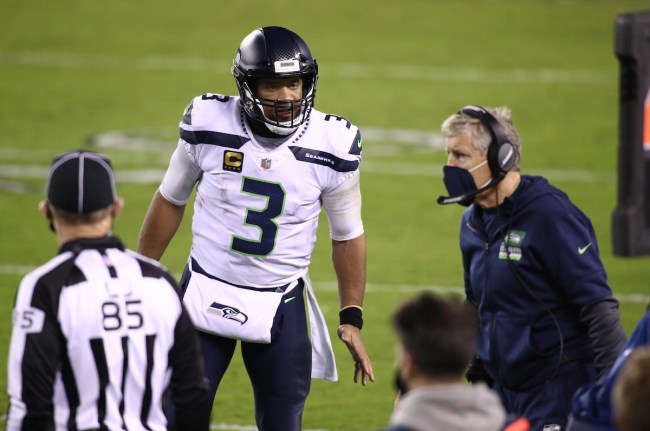 What in Sam Hill is going on between Russell Wilson and the Seattle Seahawks? After helping guide the team to the playoffs (again) last season, the quarterback — who’s easily a top-3 player in the league — reportedly isn’t too happy with the direction the team’s going in. And while the initial rumors were that Wilson was upset with the Seahawks’ decision to fire offensive coordinator Brian Schottenheimer this NFL offseason, it seems like tension runs much deeper than that.

Whether you want to believe the rumors or not, Russell Wilson’s name has absolutely been used in trade conversations. Now, don’t skew that to think the Seahawks actually want to (nor will) ship their franchise signal-caller out of town, but teams have definitely called, and, as one does, the organization has listened. In fact, one longtime and well-connected NFL reporter, Michael Silver, claims he even knows what it would take for another team to acquire DangerRuss — at least three first-round picks.

The drama between the two sides gets juicier everyday, and it even went up another notch this week after a story in The Athletic described some of the internal conversations that are reportedly going on. That report claims that Russ’ “camp” has given a list of hopeful teams to be traded to, while also outlining Wilson’s anger with the franchise after dismissing some of his suggestions to help fix the offense this NFL offseason. Here’s a description of that issue below.

“Before the Thursday night game against Arizona, Wilson met with his coaches. For some time, Wilson has sought — even pushed — for influence within the organization regarding scheme and personnel. In the meeting, he outlined his own ideas for how to fix the offense. His suggestions were dismissed, multiple sources told The Athletic — another reminder to Wilson that the Seahawks did not see him the same way he saw himself, as a player who had earned greater control over his situation, his future, his legacy. He stormed out of the room.”

For anybody who has followed Russell Wilson’s career to this point, things like that just don’t happen. The quarterback is typically too positive for his own good, and often avoids drama — even if that means sitting on his own words at times. But that doesn’t seem to be the stance he’s been taking this offseason, with The Athletic story suggesting the Pro Bowler’s standing up for himself after taking heat from both fans and the media.

“He’s finally catching heat. That’s the main reason for all of this. . . . People are talking and holding him accountable because he’s one of the highest-paid quarterbacks, he says he wants to be the greatest, so now people are holding him to that standard. . . . It’s a PR game. He’s trying to protect himself.”

Had you told me two months ago that the Seahawks would be in this position with the face of their franchise, I would’ve probably laughed it off. Fast-forward to today, and all that’s been reported, it’s got to be a little worrisome to hear these reports if you’re a Seahawks fan. One couldn’t imagine Russell Wilson actually being traded, but, in the current climate we live in, where the superstar athletes hold more power than ever, could the relationship get so bad that Seattle actually ships the quarterback out of town?

Seemingly, every quarterback is on the market right now, so who knows what comes from this? Like, would Seattle open conversations with Houston to do a Wilson-Deshaun Watson trade, and then fill in the blanks on draft picks? Sheesh, even thinking about that blows my mind, and would be a major shock in the NFL offseason.

My best guess is that Wilson and the Seahawks work it out — but only because they’ve always had a great relationship. History might not be relevant in this situation, though, depending on what parts of these recent reports are true. Wilson’s angry, and the organization needs to smooth things over quickly in order to defuse this situation before it really impacts the entire team.