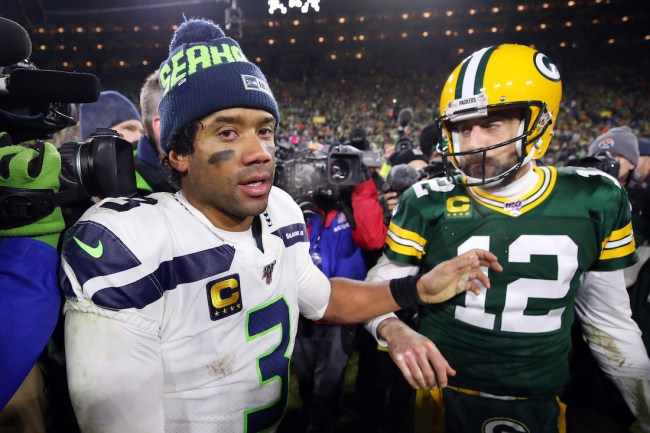 Prior to Aaron Rodgers causing all sorts of drama with the Green Bay Packers, there was reported dysfunction between Russell Wilson and the Seattle Seahawks. Ah, yes, to say this has been an eventful NFL offseason would be an understatement, as both quarterbacks are all-time greats who are surefire Hall of Famers.

Here’s the thing, though: Just because both Rodgers and Wilson are superstars, doesn’t mean that their apparent temper tantrums are warranted. In fact, both signal-callers appear to be disillusioned with what’s going on with their respective organizations, forgetting that each is coming off a season where both made the postseason — and, in Rodgers’ case, reached the NFL Championship Game.

Then again, superstars have egos, and both Aaron Rodgers and Russell Wilson appear to have let theirs get the best of them during a tumultuous NFL offseason. Wilson’s drama with the Seahawks appears to be over… for now. But let’s not forget that we’re only a few months removed from the perennial MVP candidate reportedly putting a list of preferred teams to be traded to. Yikes.

As for Rodgers and the Packers, well, where to begin? He’s reportedly trying to get the team’s GM fired. He’s rumored to be considering forfeiting his salary and possibly retiring. And he’s even apparently already recruiting players to join him on a new team. Yeah, all of this is not good.

But is any of this actually necessary? Considering both the Packers and Seahawks have been competitive since each quarterback arrived to their respective teams, probably not. And in the mind of Bleacher Report’s NFL analyst, Matt Miller, he thinks it’s time for both superstars to stop acting like “petulant children” and stop all the complaining. Here’s what Miller recently said during an appearance on the Two Guys, a Girl and a podcast.

Episode 48 is LIVE and it is a good one!

– DK Metcalf is fast, but who is the slowest
– Urban Meyer on character
– Teams we're excited about in 2021
– #PaigingTwoGuys pic.twitter.com/BuvLmJjaZG

The criticism may appear harsh from Matt Miller, but that doesn’t mean it’s not accurate. The NFL analyst calls out the fact that Aaron Rodgers has weapons all around him on offense, and is still in prime position to compete for a Super Bowl next season. Miller also mentions how Russell Wilson’s offense is loaded as well, with players like D.K. Metcalf and Tyler Lockett locked up for the foreseeable future.

So what’s both quarterback really complaining about? Each appears to feel disrespected for some reason. But both should go talk to fellow quarterbacks like Matthew Stafford, who has never been put in position to regularly win due to poor front office decisions by his previous team, the Detroit Lions.

It’s been a wild NFL offseason to this point, with players like Stafford getting traded and a future Hall of Famer like Drew Brees retiring. The craziness would’ve been elevated had both Aaron Rodgers and Russell Wilson been traded. With the latter seemingly mending fences with his team, the Packers are in wait and see mode, unsure of what to do with the disgruntled star. Rodgers may just be voicing his grievances prior to the upcoming season, and will eventually iron things out — but, at this moment, both quarterbacks do come across as whiny and entitled, with the Packers’ star seemingly throwing in the towel on his future with the franchise.