It Sure Sounds Like Russell Wilson’s Doubled Down On His Commitment To The Seahawks, Per His Teammate 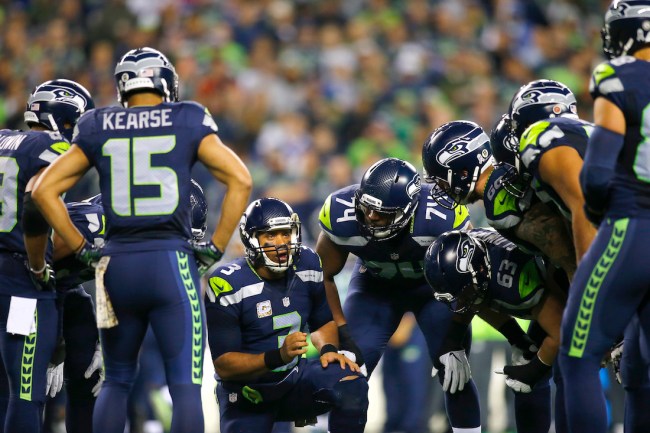 Remember all those Russell Wilson trade rumors that floated around a month ago that appeared as if the perennial MVP candidate would be shipped out of town by the Seattle Seahawks? Uh, yeah, those have apparently died down now, with the Pro Bowler (more than likely) staying put.

Sure, there were reports of dysfunction between Wilson and the organization — which allegedly included the quarterback storming out of a room with coaches when talking about offensive strategy, as well as public displays of unhappiness after the team fired Brian Schottenheimer as Offensive Coordinator during the NFL offseason — but all appears to be cool as the months have gone on. While many probably could’ve foreseen that coming (because time heals everything), Seahawks defender Carlos Dunlap recently described the quarterback’s mentality.

Speaking with Brady Henderson, the Seattle Seahawks reporter for ESPN, Dunlap said Russell Wilson has all but doubled down on his commitment to the organization this offseason, even telling Dunlap that “he’s here to stay” as the defensive end weighed his free agency options. Here’s what Wilson reportedly said to his teammate during a recent discussion.

“I did ask him if, obviously, he was going to be with us, because if I’m coming back, I’m coming back because I see him as my quarterback, and the rest of the team, I want to pick up where we left off,” Dunlap said Tuesday. “And he told me he’s with us and he’s here to stay, and he said, ‘Let’s go, Hawks.’ I’m not going to quote his every word. These words are not his words verbatim, but these are my explanation of how I interpreted what he said.”

Carlos Dunlap said he spoke with Russell Wilson before re-signing with the Seahawks because he wanted to be sure that Wilson would still be their quarterback. Dunlap paraphrased what Wilson told him: “He told me he’s with us and he’s here to stay and he said, ‘Let’s go Hawks.’” pic.twitter.com/AyIYATi86t

Now, look, this doesn’t mean that everything is forgotten and things are fine between the quarterback and the Seahawks. But it does give a sense that things are back to normal and that the trade rumors were nothing more than that, rumors. Remember, one ESPN Insider said that Wilson getting shipped out of town was “inevitable”, and there were reports that the Bears offered a boatload of assets to try and acquire the quarterback — so there’s some damage control that needs to be done here to repair the relationship.

But, if we’re all being honest with ourselves, there’s no way many people believed the Seahawks would trade Wilson this year. Sure, the NFL offseason has been insane to this point — with star quarterbacks being swapped for one another and other surprise news popping up regularly — but Russell Wilson is a different breed, and a future Hall of Famer, so Seattle wasn’t in a hurry to accept a deal just to do one.