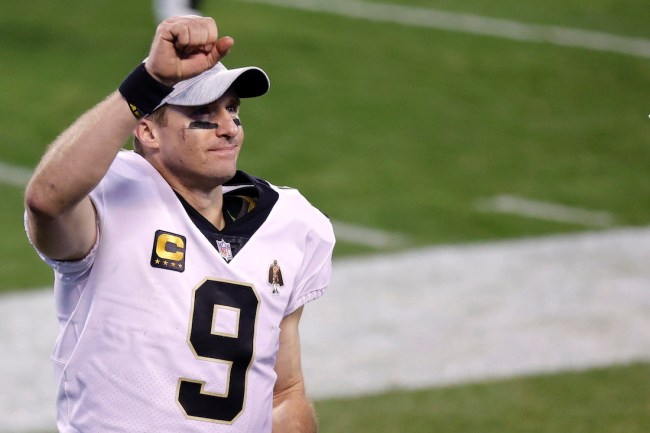 When Drew Brees announced his retirement this NFL offseason, many football fans wondered if something changed for the longtime New Orleans Saints’ icon. Sure, the future Hall of Famer dabbled in walking away from the game a season prior, but a few days prior to hanging up his cleats for good, the quarterback posted a video showing him working out and (presumably) prepping for another year under center.

Unfortunately, it was all a ruse by the 42-year-old, saying he shared the now viral video to troll fans.

Talking to Mike Florio of Pro Football Talk, here’s what Drew Brees about the idea to post the workout video, and why he decided it was time to walk away.

“I didn’t say a word, right? There’s no audio or anything of me in any of that. It’s just merely me pushing a sled. Isn’t it amazing what can be interpreted from something just so simple, right? It didn’t even involve me saying a word.

I actually got a big kick out of that,” Brees said. “That was actually my trainer Todd Durkin who I’ve worked with 18 years during my career. He posted that and he texted me, ‘Watch what this stirs up.’ It was pretty funny.

I knew I was retiring. It was something I’ve been thinking about at this stage in your career. I think it’s — you really don’t know what that feeling’s going to be like, right? You love the game, it’s been such a big part of your life for so long. You know you can play at a high level still and you’re obviously trying to achieve a goal which is to go win another championship.

At the same time, I think you also recognize the balance of life and the fact that, listen, I’ve got four kids that are not so small anymore. My oldest son, Baylen, who was one year old when I’m holding him up at the Super Bowl is now going into 7th grade next year. You begin thinking about all these things and I think maybe your football chapter of your life just kind of flashes before your eyes and you have to really give serious consideration each year to kind of reevaluate where you are and what your priorities are.”

So while the Saints fans were convinced that Brees would be returning after seeing him pour his blood, sweat and tears into the workout on the video, sadly, it was just his longtime trainer messing with the Internet. That’s some A+ trolling.

As for when the quarterback knew he was retiring, he told Florio the idea popped into his head a couple of NFL offseasons ago.

“I considered this probably two, three years ago. To be perfectly honest, going into the 2017 season, we had come off a couple tough years with the Saints. I started taking that personal, honestly. I was like, ‘You know what, if I can’t bring us back to the playoffs, maybe I’m not the right guy for the job. Maybe I need to get out of here.’”

It’s wild to hear Drew Brees admit he nearly retired two or three years ago, and then see him recommit himself to training, studying film and leading the New Orleans Saints to the playoffs in each of those seasons. For a guy who thought he didn’t have it, he sure did put himself in the best position to succeed — which is why he’ll forever be remembered as an all-time great.