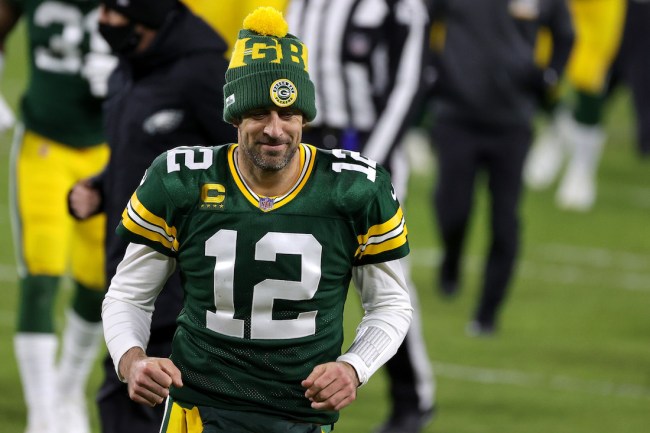 The latest on the Aaron Rodgers-Green Bay Packers drama is… something. While rumors have been swirling about the reigning MVP wanting out this NFL offseason, things may have just been taken to a whole new level with a report from the NFL Network’s Ian Rapaport and Mike Garofolo.

According to the longtime football writers, Rodgers isn’t just trying to force his way out of Green Bay — with reports that he’s doing his best to get the team’s GM fired and reportedly willing to retire if he doesn’t get what he wants — but then there’s this: That the quarterback “has spoken to several different players about joining him somewhere else,” per Garofolo. This whole thing is insane.

From NFL Now: The #Packers and QB Aaron Rodgers have a complicated relationship. And it could go in any direction right now. pic.twitter.com/nnlAEpjBhI

If true, then the writing’s absolutely on the wall and the Green Bay Packers needs to cut their losses and trade Aaron Rodgers at some point this NFL offseason. Yes, it will be unpopular. Yes, it will set the franchise back a few years. Yes, it will be ridiculed by the media and judged for the next decade or so if the swap doesn’t return serious value. But the organization needs to man up and set a precedent so not to be embarrassed even more.

It’s one thing for a player to be talking to other players when said player is a soon-to-be free agent. We see that all the time in the NBA — remember that hallway meeting between Kyrie Irving and Kevin Durant at the 2019 NBA All-Star Game? But to think that Rodgers is still under contract with the Packers and doing this is so disrespectful and so damning that Green Bay needs to stop playing games and move on from their future Hall of Fame quarterback.

Remember, the Packers reportedly offered the signal-caller a hefty extension this offseason that would’ve made him the highest-paid player at his position this upcoming NFL season. Aaron Rodgers turned it down. So it’s obvious he has no intentions of returning to Green Bay — something his former teammate, Brett Favre, recently spoke about, saying Rodgers “ain’t budging” in his demands.

It’s bad enough that the Packers royally messed this whole thing up with their iconic superstar. It’s another thing to continue to let the guy drag the franchise through the mud as a way to get what he ultimately wants. Unfortunately, the Packers hold little leverage here — since it appears Rodgers doesn’t care about just money — so it’s either trade the quarterback, or deal with this headache for the foreseeable future while paying a player who never plans to play another down for them.

This whole report about Aaron Rodgers recruiting other players to a new team could be false. It could be something his people are putting out there behind closed doors to the media to create a stir and cause a reaction like the one I outlined above: To get the quarterback traded. But if there’s any truth behind it, it should be the biggest sign yet that the Green Bay Packers need to jump ship and turn the chapter on this era.