Kevin Durant Finally Admits What We All Thought: He And Kyrie Irving Plotted Their Move To Nets Long Before 2019 Offseason 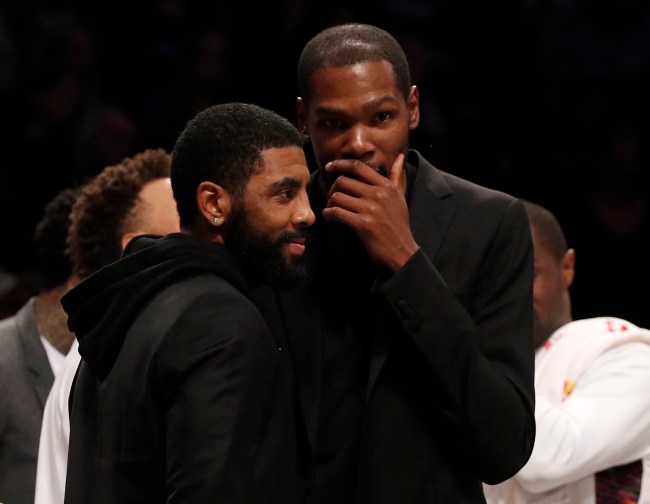 It seems like forever ago, but, during the 2018-19 NBA season, the entire narrative centered around a loaded free agent class that was headlined by guys like Kevin Durant, Kawhi Leonard and Kyrie Irving, among other superstars. Throughout that year, reports littered social media about Durant’s tension with his then team, the Golden State Warriors, how Irving was doing a poor job leading a young Boston Celtics team, and, ultimately, how Leonard led the Toronto Raptors to a championship during his lone season playing in Canada. In basketball terms, it was a wild time, man.

With all the rumors floating around during that NBA season, all three superstars did what every polarizing player does: Deny and reports and brush aside any rumors about where he might end up during the offseason. That’s like Athlete 101 stuff, and KD, Kyrie and Kawhi all did it to perfection.

When all was said and done, though, each player left the team he was playing with at the time, with Leonard signing a two-year deal with the Los Angeles Clippers, and both Irving and Kevin Durant joining forces with the Brooklyn Nets — which had been a rumor for months leading up to free agency. And, while both players had tried putting to rest any rumors about teaming up, Durant finally admitted what we all knew: That he and Irving plotted the move to Brooklyn during the 2019 NBA All-Star Game.

For those who haven’t yet lost their memory, there was a video at the time of Irving and Durant in a hallway (seemingly) talking about their then pending free agency. Audio captured Kyrie excitedly saying something along the lines of “two max spots,” which it was going to take for a team to get the duo together. At the time, nobody knew which team the stars were referring to — with many thinking it was the New York Knicks (LOL) — but it ended up being Brooklyn instead. Take a look at the video below.

Well, thanks to Kevin Durant and Kyrie Irving’s appearance on a new podcast called “The ETCs” on The Boardroom, we know for sure that, yep, that’s when the star pair schemed the move. Here’s what they both had to say on the podcast.

At the 36:30 mark of the podcast, Irving is explaining how he and Durant both arrived in Brooklyn and how much of a surprise it was. And Durant interjects with this point.

“The All-Star game video where they caught us in the hallway. That’s when it was solidified that we were going somewhere. They didn’t know for a fact where it was, but it was somewhere.”

There you have it, guys, Durant and Irving absolutely had their free agency destination pretty much signed, sealed and delivered at that moment; which was literally five months before they hit the open market. So never, ever deny the fact that these guys know exactly what they’re doing when they actually have the choice, because, contrary to what they often say, they at least have an idea about their next move. It’s why Milwaukee Bucks fans should be really concerned given some of the things two-time league MVP Giannis Antetokounmpo has said about staying — because he’s (probably) as good as gone. Hell, he may even know where he wants to play next.

While Kevin Durant’s admission is a bit of a surprise — even if we all had an idea that the hallway conversation with Kyrie Irving was absolutely about teaming up as free agents — it’s sort of highlighted by Irving’s reaction afterwards. That’s because the surly point guard shunned the media for reporting about the video and insisted he was just having a discussion with “one of (his) best friends.”

Considering the Kevin Durant-Kyrie Irving discussion occurred and led to the star duo deciding to team up in the offseason, I’d be pretty pissed as a Warriors or Celtics fan — with whom the two were playing for at the time. Sure, Irving ended up getting hurt and missing the rest of the season after the All-Star Game anyway, but, given Durant’s tense relationship with Golden State teammate Draymond Green at the time, could he have shutdown any hope of mending fences there because he knew it wasn’t worth it if he were leaving? Maybe. Maybe not. But it’s still a pretty bad look; and only makes the two even bigger villains as they head into next year’s NBA season.