Brooklyn Nets And Kyrie Irving Are Banking On Kevin Durant Being Persuaded By ‘His New Best Friend,’ Per Report 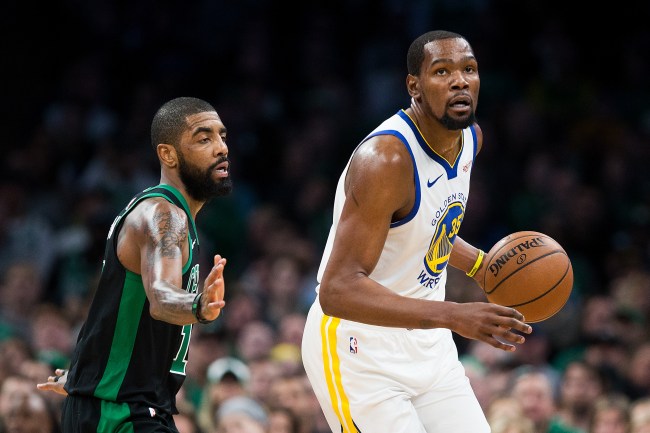 Kyrie Irving free-agency rumors have been running rampant all season long, with the past few weeks giving us a ton more to talk about — like how the six-time All-Star was walking into a townhouse in New York City looks as happy as a kid on Christmas morning. And, while it’s basically over between the former No. 1 pick and the Boston Celtics, no one knows for sure where Irving will end up when he hits the open market this summer; but we’re getting a better idea that he’ll land with the Brooklyn Nets.

Kyrie Irving is serious about the Nets — and the Nets are serious about beating the Knicks — and rest of league — to the biggest free agents in the marketplace, per league sources.

Although Kyrie Irving’s been linked to teams like the Los Angeles Lakers and the New York Knicks for months, it seems like the Nets are the leader in the clubhouse for his services, especially after the team made a sneaky move to add salary cap relief by trading Allen Crabbe’s monster contract to the Atlanta Hawks, creating enough room for the Nets to go after two max players. Could Irving be one and Kevin Durant be the other? It seems like that’s what both are hoping for, according to ESPN’s Brian Windhorst, who detailed the presumed plan this morning on SportsCenter.

Well, based off that report, it almost seems as if it’s a foregone conclusion that Kyrie Irving’s ending up with the Brooklyn Nets, with the two all but planning a strategy to get at least one other superstar to join him. Given Irving’s friendship with Kevin Durant — which Irving was salty about earlier this year for the media overanalyzing — it makes sense that Windhorst’s report is accurate.

While the NBA has come down on team hard AF for tampering, somehow, this whole thing between the Nets and Kyrie Irving isn’t really being looked into — even though the point guard’s still technically under contract with the Celtics. And, although there have been reports about teams being “wary” of giving Irving big money this offseason because of his previous injuries and “toxic” personality, it doesn’t seem like the Nets are one of them. Now if only he can convince Durant to switch coasts, the NBA landscape will be totally different heading into next season.