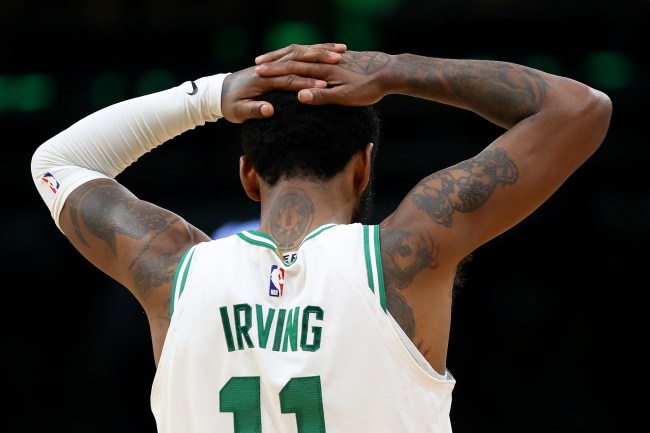 It’s a damn shame we couldn’t wait like one week for the NBA season to be over to start anxiously and erroneously speculating about free agency. But the NBA and its media are the pettiest in all of sports and I wouldn’t have it any other way.

Believe it or not, Kyrie Irving is not cooped up in his Boston home watching Good Will Hunting in a Bob Cousy jersey before heading to the original Cheers bar to suck down a couple Sam Adams that pair nicely with a cup of New England claw chowda.

It’s almost unfathomable that Kyrie, who is a multi-millionaire on summer vacation, is seeing different parts of this great country. It’s be one thing if he was spotted in fucking Milwaukee, but the dude was seen in the most famous city on the planet. Why? Because it’s New York Fucking City. Have you been to New York City in the warm weather months? It’s boner central.

That’s probably why the man who is always sad was smiling when he was spotted walking into a townhouse on the Upper East Side.

This is not a drill. Kyrie Irving just spotted in New York walking into a townhouse on 72nd St between 2nd and 3rd wearing his biggest smile of the past year pic.twitter.com/c110JPjyfx

But mayyyyybeeeee Kyrie is holding shoes that are Knicks-colored orange and is wearing a black shirt to match the souls of NYC’s residents because he’s going to the Knicks.

Who is to say?

It’s official. Kyrie to the Hawks.