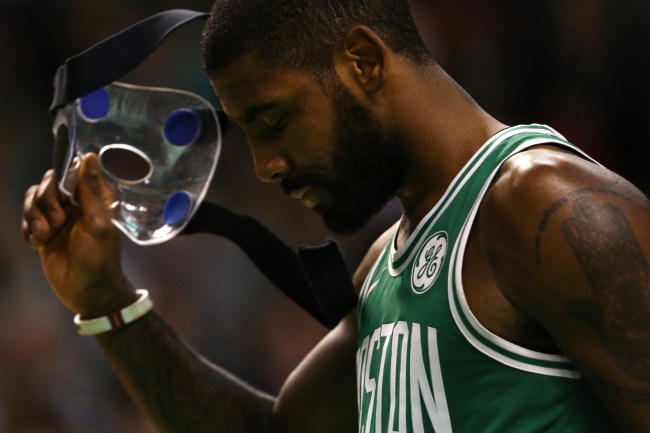 Kyrie Irving will be one of the top NBA free agents this offseason, but, given his injury history in his eight seasons so far, there’s apparently some concern that the six-time All-Star might have an “old body” — which comes after reports that teams are “wary” of signing him after a toxic season with the Boston Celtics. Sure, Irving might still only be 27 years old, but with the mileage he’s had on his frame from extended playoff runs, as well as time off due to major injuries to his knee, at least one NBA executive voiced some worry.

That’s according to Chris Carter of FS1, who, on the TV show First Things First, said that an anonymous front office executive said that Kyrie Irving’s past injuries are something that could make teams shy away from him this summer in free agency — at least as a solo act. While committing a bunch of money to Irving and putting the onus on him to be the franchise player isn’t the preferred route, Carter said that his source did mention that it could be possible should the former No. 1 overall pick team up with a guy like Kevin Durant, which has been a rumor for months.

“I talked to a prominent NBA executive who said ‘Kyrie Irving is young, but he has an old body,’” said Carter on “First Things First.” “And you have to understand that those last couple of years, you might be taking home someone who is damaged goods, who is only a shell of himself. But also, there is people that would take Kyrie if he’s with Kevin Durant. If Kevin Durant said ‘I want Kyrie,’ then Kyrie is gonna be on the team with KD.”

Here’s the full segment of Chris Carter talking about what his source told him about Kyrie Irving’s upcoming free agency, via First Things First‘s Twitter.

.@criscarter80 talked to a prominent NBA executive who said teams may be worried about Kyrie's aging body. pic.twitter.com/4fk8foP7eg

Although this is the funny season for rumors, Chris Carter’s source may not be too far off with his claim. That’s because Kyrie Irving did miss 15 games this season, after missing 22 in his first year with the Boston Celtics due to a variety of injuries. When you consider Irving has also had a number of surgeries to the knee he hurt during the 2015 NBA Finals, and there’s some serious validity to the claims that he may have an “old body,” as Carter put it.

Sure, Kyrie Irving is about to be one of the top-flight free agents in this summer’s loaded class — and he’s probably already shopping for a new team — but for a franchise to give him $30 million or more per season for the next five years could be a mistake because of the major bumps and bruises he’s already sustained. We’ll have to wait and see how all of this plays out, because it could be a major storyline as the wild NBA offseason goes on.