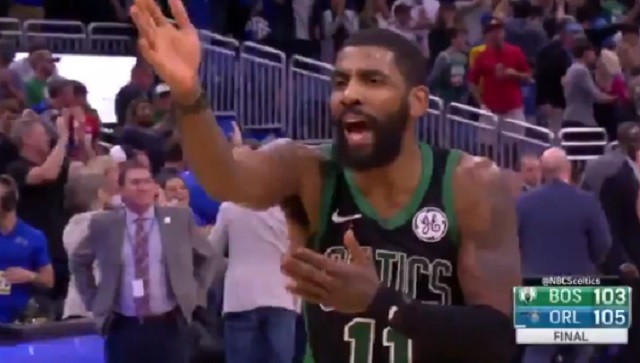 Kyrie Irving is fed up with his Celtics teammates.

Tonight, the Celtics lost another road game and team’s leader was frustrated when his teammates failed to get him the ball on the final play of the game while down two points.

Kyrie Irving was visibly upset with Gordon Hayward following a bad loss to the Magic. pic.twitter.com/crR3XADR3v

After the game a seething Kyrie let the team and the media know how he felt after another disappointing loss.

Kyrie is sitting at his locker just staring straight ahead. Hasn’t showered yet. Most of the other players have already dressed and left.

Kyrie Irving had a lot to say postgame but what stood out was “The young guys don’t know what it takes to be a championship level team. What it takes every day. And if they think it is hard now, what do they think it will be like when we’re trying to get to the Finals?”

Kyrie continued with “There were no expectations last year. Everyone played free and easy. Everyone surpassed whatever they expected for themselves. This year? We all have high expectations. The players, the coaches, everyone. And that’s good, but we aren’t doing it yet.”

Kyrie was asked to compare this Celtics team to the Cavs teams that went to the Finals: "There isn't a comparison. That team had experience. Guys were on their last legs. This was it for them. We were the oldest team in the league. We don't have that. Guys have 13-14 years left."

One more item from Kyrie that stood out: "I know from the majority of the fact that we’re better than most teams in this league. It’s just going out and proving it every single night and demanding it and actually showing it. It's not easy to be great."