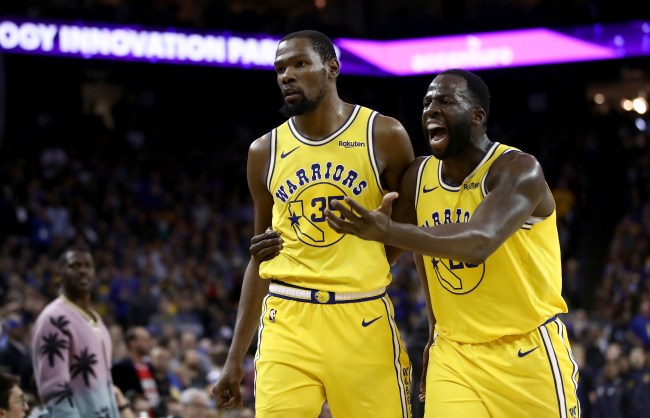 Kevin Durant is beginning to open up about his departure from Golden State and Warriors fans aren’t going to be happy about it.

Last year, Draymond Green and Durant got into a beef early in the season when Durant was angry Green didn’t pass him the ball late in a game.

According to reports, Green called Durant a “bitch” several times and told him “we don’t need you” during the exchange.

Green called Durant a “bitch” multiple times, sources said. In a summarized version, sources said Green shouted, “You’re a bitch and you know you’re a bitch.” The rhetoric, sources said, continued even when Kerr attempted to direct the team’s attention to his whiteboard.

But what ultimately led to Green’s suspension, sources said, was a remark in which he dared Durant to bolt in free agency next summer. Durant has a player option for the 2019-20 season, and the Warriors want their superteam intact for the opening of their new arena, the Chase Center, in San Francisco next season.

Green blurted to Durant something along the lines of, “We don’t need you. We won without you. Leave,” sources said.

During his appearance of First Take this morning, Durant admitted that Draymond’s beef with him played a role in him leaving Golden State.

"Definitely. For sure. I'm not gonna lie about it."

“A little bit, yeah, for sure,”. “If your teammate talks to you that way, you think about it a bit. We talked about it but definitely, for sure, I’m not gonna lie about it.”

Durant went on to say that he wish the incident with Draymond never happened because it brought unnecessary baggage.

Kevin Durant on his relationship with Draymond Green and the incident between the two last season against the Clippers: pic.twitter.com/8xeQ4mFsfD

I wish that wouldn’t have happened. It was a situation that definitely could have been avoided. It really came out of nowhere,” he said. “Everybody was just looking for something to tear us down, and that just brought in the firestorm with every day being about my free agency … it opened up a lot of nonsense that could have been avoided.”