Even After Winning NBA Title, Raptors Reportedly Still Have ‘Work To Do’ To Keep Kawhi Leonard This Summer 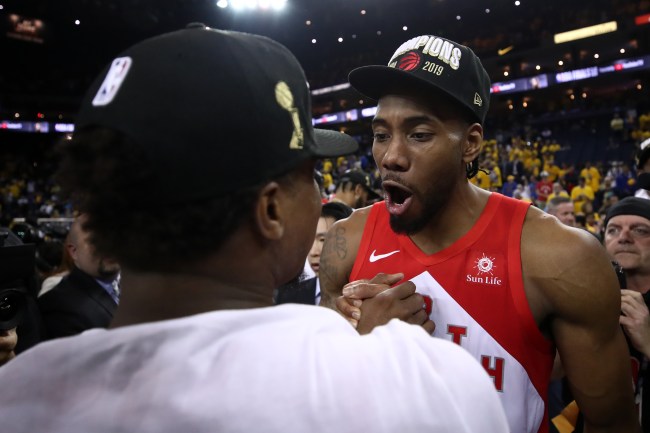 Kawhi Leonard led the Toronto Raptors to the franchise’s first ever NBA championship last night by beating the previously favored Golden State Warriors, instantly becoming a legend in Canada — which had already adored him for the greatness he put on display throughout the NBA Finals. While the team and entire country are still probably hungover from the celebration, there’s an elephant in the room that needs to be addressed: Kawhi Leonard’s upcoming free agency.

Now that Kevin Durant and Klay Thompson are injured — with both, potentially, missing all of next season — there’s no denying that Leonard is the No. 1 free agent in the NBA this summer. And, while he and his teammates might still be soaked in champagne, there’s no guarantee that Kawhi will return to the Raptors to make a run at defending the title. In fact, according to ESPN’s Adrian Wojnarowski, it might be a long shot.

Appearing on SportsCenter today, Woj mentioned that the Raptors “still have work to do” when it comes to convincing Kawhi Leonard of sticking around town. Here’s what the reporter had to say.

“He came to Toronto, with the idea from San Antonio, this was a very fine one year way station and I’m sure exceeded his expectations how they managed him physically to be a Finals MVP again, to win a championship,” Wojnarowski said on SportsCenter on Friday.

“But there was always the risk of him going back west. The L.A. Clippers are at the very top of that list, and I think the Raptors still have work to do between now and June 30 and the start of free agency to keep Kawhi Leonard in Toronto.”

This might not be a huge shock to some hoops fans considering Kawhi Leonard has long-been linked to the Los Angeles Clippers, with the NBA Finals MVP reportedly having his eyes on the Clips ever since last summer before the San Antonio Spurs traded him. Does that mean Leonard is as good as gone? Not necessarily, but, as Woj points out, it’s a hurdle that the Raptors need to overcome to further sell a return to Toronto.

Thing is, Leonard can fall back on the fact that, in his one year with the Toronto Raptors, he accomplished something that had never been done in the franchise’s previous 25 years — win a title. Similar to how LeBron James followed through on his promise to deliver the Cleveland Cavs a title when he returned in 2014, so, too, can Leonard lean on the fact that he can leave without regret.

Bottom line is this: Regardless of just Kawhi’s decision, the entire NBA offseason is about to be nutty.