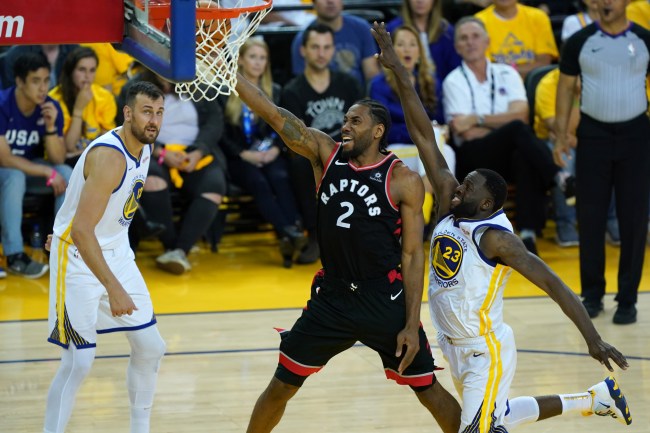 Kawhi Leonard is in the middle of the NBA Finals, so it’s understandable that his full attention is on leading his Toronto Raptors to a title over the Golden State Warriors in the next week or so, not how his upcoming free agency might go down. But, considering he’s still just 27 years old and is about to be one of the top-flight superstars available on the market in less than a month, Leonard just can’t help but get hit with questions about it.

There have been rumors for months that Kawhi Leonard is all but gone from the Raptors no matter how the NBA Finals plays out — although some think he could return on a short-term deal. That’s because, since trade rumors popped up last summer while he was still with the San Antonio Spurs, one team that has been linked to him have been the Los Angeles Clippers, with some of his own teammates thinking he’ll head to the Clips. It’s also been reported that he’s already been pitched by LeBron James about the Los Angeles Lakers, so it’s safe to say that people are doing everything they can to try and lure Kawhi Leonard even before he’s a free agent.

However, the stoic Leonard is biting at some of the questions or the rumors, as he’s claimed that he hasn’t even thought about what might happen in a few weeks. At least that’s what he told ESPN’s Rachel Nichols, who asked him about free agency in a segment prior to Game 4 of the NBA Finals.

This isn’t much of a shocker, obviously, because every player who is a pending free agent seems to be claiming this. It’s one thing to hear a guy like Kyrie Irving say it — because he’s out of the NBA Playoffs — but it’s different for a guy like Kawhi Leonard to shrug off questions about it because he’s still hunting for a title. So you’ve got to trust his word here.

Then again, there was that video a couple weeks ago that popped up with his sister after the Raptors reached the NBA Finals, where someone in the background could be heard hinting at Kawhi leaving Toronto. Was that true? Maybe. Has Leonard at least put out feelers about free agency? Obviously. If he hasn’t, he’s doing something wrong, because every great player wants to have some intel into what other guys are thinking.

For Kawhi Leonard, though, he’s built like a robot, so maybe he truly hasn’t thought about free agency at all; as crazy as that sounds. And, if he ends up winning a title in Toronto, it’ll be interesting to see if he returns to the Raptors to try and defend it next year, or if he wipes his hands clean and thinks, “hey, I’ve done what I meant to do.” It’s all pretty intriguing stuff.