The Clippers Have A Better Than 50% Chance Of Landing Both Kevin Durant And Kawhi Leonard, Per Stephen A. Smith 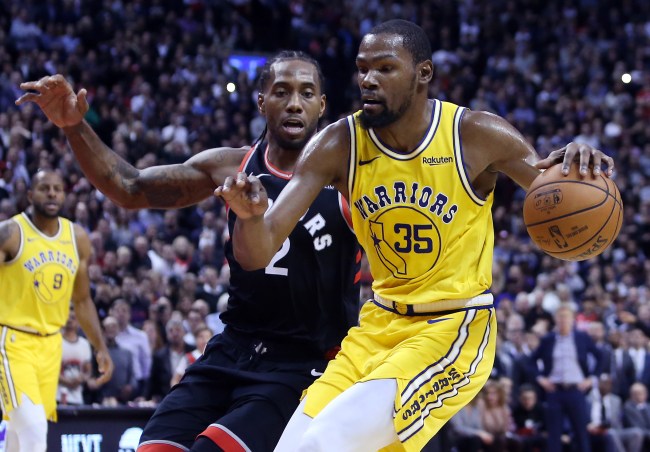 Stephen A. Smith is pretty well-connected within NBA circles, so when he reports something, fans have to take it at face value. Sure the ESPN personality is best-known for his rants and F’ing up a few things when talking about the NFL, but Stephen A. is a basketball savant, so his latest report might come as an absolute bombshell.

That’s because Stephen A. Smith said today on ESPN’s First Take that he’s heard that the Los Angeles Clippers — not the more glorified NBA team in L.A., the Lakers — have a better than 50 percent chance of landing not just one superstar this summer, but two; and they’re the biggest fish in the pond, with Smith saying both Kevin Durant and Kawhi Leonard could be heading to the Clips. Take a look at what Stephen. A. had to say.

What?!? Sure, Stephen A. Smith admits that he hasn’t talked to Kevin Durant nor Kawhi Leonard about this, but, within the NBA circles and, presumably, his own sources, it’s widely expected that the Clippers have a huge chance at getting both All-Stars.

In Leonard’s case, it makes sense that he’s linked to the Clips. After all, going back to last summer before the San Antonio Spurs traded him, the Clippers were rumored to be the destination of choice. As for Durant, that’s a different animal, because the two-time NBA champ and former league MVP has been linked more to the New York Knicks than almost anyone else, with one recent report even going as far as saying it’s a done deal.

With the Clippers fighting and clawing in their opening round series with the two-time defending champion Golden State Warriors in this year’s NBA Playoffs, the young roster’s showing players around the league that there might be a solid future in the works with some additional help. And, if Stephen A. Smith’s report is right and the team lands both Kevin Durant and Kawhi Leonard, it’s safe to say the Clips will instantly become favorites for the NBA title next season.

All of this is, of course, a major blow to the Los Angeles Lakers and star LeBron James, who have the mystique but, as of right now, are an absolute mess. With a recent report claiming the Clippers are a more interesting destination for free agents than the Lakers, the tables seem to have turned with which franchise has more power.