It’s Officially Time To Ban Stephen A. Smith From Talking About Football After His Latest Gaffe 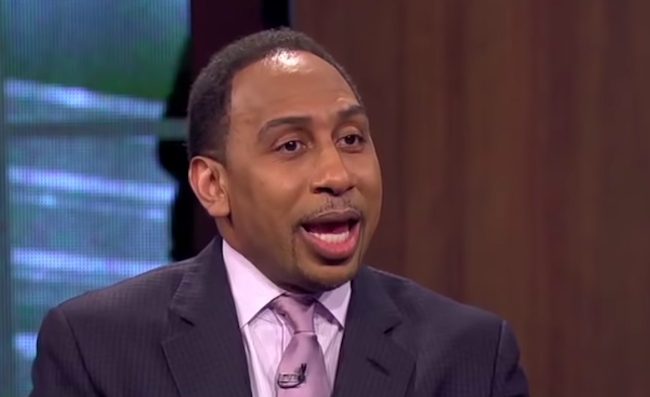 Stephen A. Smith is reportedly paid over $3 million a year to spew hot takes like a volcano on ESPN, which is a pretty impressive sum for someone who doesn’t actually seem to know a ton about sports—especially when it comes to football.

If you’re unfamiliar with Smith’s impressive line of gaffes, here’s a quick primer.

Smith kicked things off with a bang back in December when he absolutely butchered his analysis of a game between the Chiefs and the Chargers and confused the hell out of Tedy Bruschi in the process.

He followed up that performance a week later with a take that was cold enough to freeze hell over concerning Josh Gordon’s mental health.

This is a HORRIBLE take from Stephen A Smith on mental illness and addiction. I’m absolutely appalled this aired on television. pic.twitter.com/W7tYQca2OA

As if that wasn’t enough, Smith forgot Drew Brees was playing in the NFL playoffs this year because his stupidity truly knows no bounds.

Forget about the order… @stephenasmith left Drew Brees off the list 😭😭😭😭 #Blasphemy pic.twitter.com/pfsGbGZV1p

Now, I think it’s time we consider banding together in an attempt to get Smith banned from talking about the NFL (and football in general) after yet another slipup.

Smith was addressing the quarterback situation in Washington and decided to highlight their problems by listing off all of the players they’d had in the pocket last year.

However, there was one tiny problem—one of the QBs in question was actually punter Tress Way.

This man ⁦@stephenasmith⁩ at it again saying Tress Way started a game at QB for the Skins 😂 C’monnnn man. If you’d dig a little deeper than the boxscore, you’d see Tress Way is a damn Punter pic.twitter.com/6YM5GVxNRa