Stephen A. Smith Proved He Knows Nothing About Football Yet Again By Forgetting Drew Brees Exists 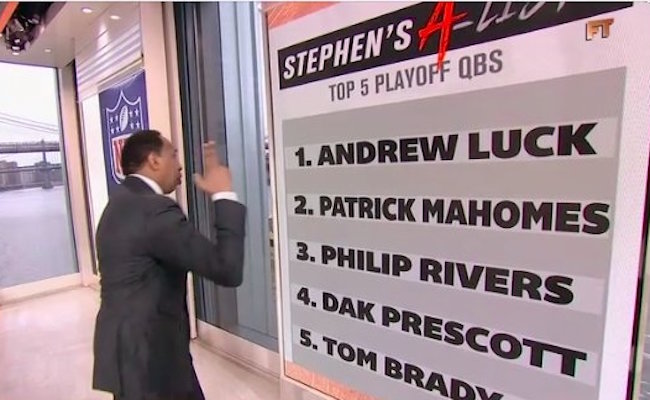 Over the years, Stephen A. Smith— the Taco Bell Diablo Sauce of the sporting world— has built a career on a foundation of incredibly spicy takes, whether we’re talking about his stance on mental illness or his opinion on almond milk.

Smith is willing to spout off about virtually anything under the sun regardless of whether or not he has any knowledge of the topic at hand. He’s repeatedly proven this in recent months as more and more evidence has emerged suggesting he knows close to nothing about the NFL.

In December, Smith was mocked relentlessly after he attempted to analyze a game between the Chargers and the Chiefs and crashed and burned harder than the Hindenburg.

Smith got trolled by a Chargers player after the game, and earlier this week, the Arizona Cardinals added insult to injury after the ESPN personality delivered a relatively tame take concerning new head coach Kliff Kingsbury.

We thought you would be in a good mood since the Chargers activated Hunter Henry this week. https://t.co/lkVzzDwEa2

I don’t know if anything will ever be able to top Smith’s Chargers-Chiefs debacle but he did what he could yesterday during a segment on First Take where he attempted to rank the best quarterbacks currently competing in the NFL playoffs.

However, there was one tiny problem with his list: he forgot Drew Brees was a person who exists.

Forget about the order… @stephenasmith left Drew Brees off the list 😭😭😭😭 #Blasphemy pic.twitter.com/pfsGbGZV1p

The 39-year-old QB currently holds the record for the most career passing yard in the history of the NFL and only trails Peyton Manning as far as touchdowns are concerned.

Following the reveal, the First Take crew noticed the omission and rightfully put Smith on blast as he attempted to defend himself:

“Brees was a total mistake. A slip-up on my part. I actually thought I had him on the list. I just forgot. Honestly speaking, my focus was making sure I kept Nick Foles off the list.”