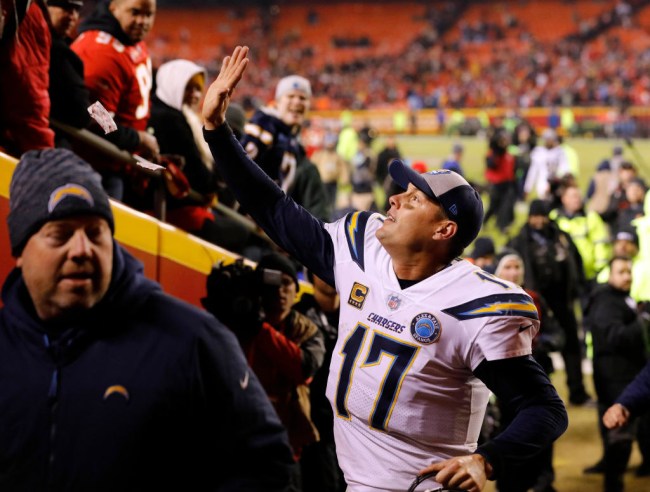 I think it is safe to say after 16 years in the NFL, Philip Rivers is the kind of gigantic prick athlete that if he’s on your team you love him for his unabated swagger and perfectionism, while almost every other player in the league thinks he’s just a flaming a**hole.

He’s such a dick on the field that while I want to hate him, I just can’t because of how much he dials up the churlishness on a weekly basis. When someone goes to his extreme it’s hard to not like the guy’s style.

That, however, is not a problem for fans of the teams who have to face Rivers and the San Diego Los Angeles Chargers regularly. Like, say, Kansas City Chiefs fans.

Or, should I say, ESPECIALLY Kansas City Chiefs fans, after Rivers and the Chargers showed balls of steel going to for two, snatching victory from the Chiefs on Thursday night.

As he was exiting the field to a chorus of boos from Chiefs fans, Rivers went full savage, waving to them like the giant troll that he is.

Philip Rivers waves goodbye while getting a postgame shower of boos. 👋🏼 pic.twitter.com/Y639umcSKF

After the game, Chargers head coach Anthony Lynn explained his logic in going for two, calling it a “no-brainer.”

Another no-brainer? Stephen A. Smith’s horrificly ill-informed take prior to the Chargers-Chiefs game when he referenced three players who weren’t even going to play in the game – one of them being Chargers tight end Hunter Henry, who is on injured reserve.

Following the epic win, Chargers offensive lineman Russell Okung just couldn’t help himself, taking to Twitter to thank Henry for his contribution to the victory.

I think I am starting to become a Chargers fan. Wonder if they have any tickets available for their next game?