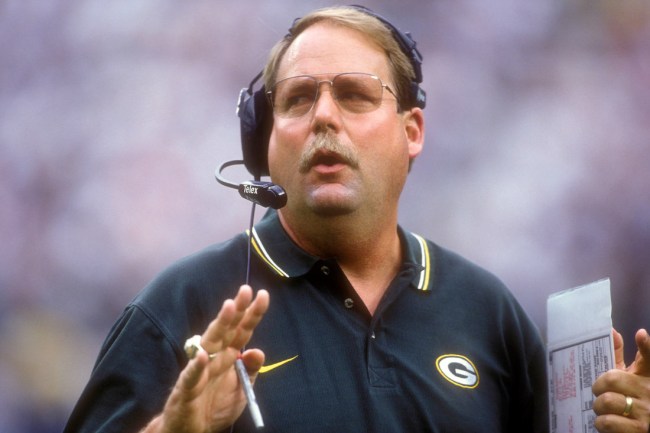 The Aaron Rodgers-Packers situation has taken center stage this NFL offseason, with the reigning league MVP’s relationship with the franchise believed to be more than just a little bit dicey at the moment. From reports of the quarterback wanting the team’s GM fired, to speculation as to why the future Hall of Famer’s upset, to, naturally, what Rodgers might do if he doesn’t get what he wants, the day-to-day drama is wild to keep up with.

While nobody knows how all this turns out, former Packers head coach Mike Holmgren — who coached the team from 1992-98 and led them to a Super Bowl title in the 1996 season — can’t believe it’s even gotten to this point. Speaking to ESPN Radio in Chicago, Holmgren criticized the organization for failing to minimize the dysfunction between it and Aaron Rodgers early on.

“They didn’t handle it very well, I don’t think… I would call him in [and say], this is how it’s gonna affect you. We’ve got to get ready for when you retire,” Holmgren said. “We’ve got to take care of the franchise, but nothing’s going to happen now. You’re the man, you’re the guy. Then, if he didn’t like that, now all of a sudden you’re in the current situation that you’re having.”

“I can’t imagine a relationship between the coach or management or whoever is making the decisions and the starting quarterback like that getting to this point. I just can’t imagine it. I wouldn’t allow it. It wouldn’t happen. But now, it has happened.”

So how would Holmgren had dealt with a superstar quarterback who feels both disrespected and upset with how the Packers have made decisions over the past couple of NFL offseasons? When answering that question, the former coach said he would “call [Rodgers] in, we’d sit down and not leave until we kind of had an understanding one way or the other.”

Unfortunately for the Green Bay Packers, any opportunity of doing that has passed, and now the franchise is further down the hole of uncertainty, not knowing what to do with a disgruntled all-time great who doesn’t appear to have interest in suiting up for the team ever again. Whether that speaks to a lack of leadership internally or something else, it’s something the organization must regret.

As for Mike Holmgren, he dealt with a young Brett Favre throughout the legendary quarterback’s career in Green Bay, so the coach is familiar with superstar personalities. It’s just too bad the Packers can’t call him up to try and mend some fences with their current quarterback, because it sounds like he has a better strategy than what the current leadership has done to this point.