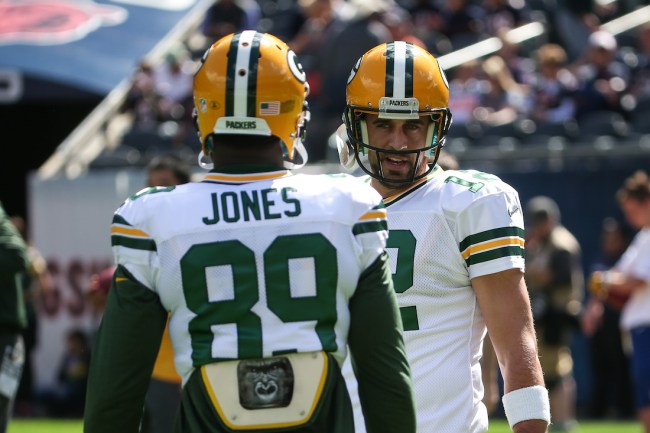 There aren’t too many people showing much optimism about the Aaron Rodgers-Green Bay Packers situation. As every sports fan knows, the reigning league MVP has been upset with the organization since last season’s loss to the Buccaneers in the NFC Championship Game, which was the first glimpse of the quarterback showing real frustration. That even led to some wondering if Rodgers would retire.

Most people assumed the future Hall of Famer was just drained after a tough loss, and that a few months away from football would clear his mind and allow him to refocus. Boy, how wrong was everyone about that?

Fast-forward to today, and Aaron Rodgers’ relationship with the Packers has actually gotten more combative, with the quarterback skipping out on mandatory minicamp, reportedly seriously considering retirement, and allegedly trying to get the team to fire general manager Brian Gutekunst. To say this relationship is a mess would be an understatement.

But could there actually be some light at the end of the tunnel? While many think Rodgers will stand his ground and won’t be returning to the team anytime soon — which includes Brett Favre — another former teammate of the quarterback’s has optimism the situation will be better by training camp.

Former NFL wideout James Jones joined Colin Cowherd on Wednesday to discuss the Aaron Rodgers-Packers situation, and didn’t just offer up a few insights from his own conversations with the quarterback, but also hinted that, just maybe, the drama can be “fixed” by training camp. He also thinks this drama could even lead to a stronger relationship between both sides. Take a look below.

“I truly believe that he will be there for training camp, this will get fixed, and I think the relationship will get much better between him and the GM,” Jones told Colin Cowherd.

So why is Rodgers not participating in the Packers’ mandatory minicamp this week?

“His No. 1 beef is a private conversation on the phone that I can’t share with you,” Jones said.

James sure is being cryptic, but it’s telling that a guy who claims to talk with Aaron Rodgers “all the time” says the quarterback isn’t upset with general manager Brian Gutekunst. For weeks, it’s been reported otherwise.

As James Jones continued, though, he did give a little insight on what could be leading to Rodgers skipping out this NFL offseason: The players that the Packers have allowed to leave over the past few years.

Who knows if Jones knows anything or not, but as Rodgers’ former teammate, he should be taken at face value here. It’s a bold claim to say that he talks to the quarterback all the time if, in truth, that isn’t happening. So let’s assume everything the former wide receiver says is accurate.

If that’s really the case and Aaron Rodgers is standing his ground because of past decisions made by the front office, the star quarterback’s even pettier than we all imagined. It’s understandable if he’s mad about Jordan Love being drafted. It’d make sense if he were upset about not getting a new contract (even though he reportedly did get an offer). But for him to pout about roster decisions from the past? Kind of pathetic.

James’ insight echoes that of a previous report about Aaron Rodgers being unhappy with the team’s decision to release wide receiver Jake Kumerow. So all of this is probably accurate. Still, it’s certainly an interesting reason for such volatility.

The next month will reveal a lot about what comes next between both sides. It’s hard to imagine Rodgers sits out the season and gives up such a massive salary, or, even stranger, straight up retiring. Then again, nobody foresaw the current situation occurring, so it really is total crapshoot as to how this all ends up.