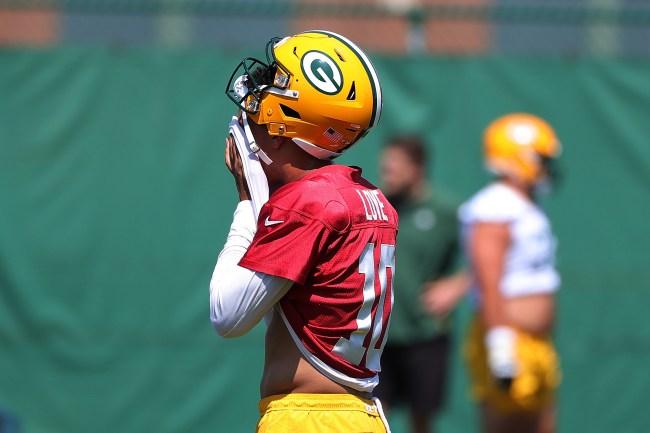 Today was the first day of Packers minicamp in Green Bay and Packers fans are already freaking out.

On Tuesday, Aaron Rodgers, who is currently beefing with team GM Brian Gutenkunst and reportedly demanded a trade months ago, decided not to show up to mandatory minicamp.

Rodgers’ backup, Jordan Love, did show to minicamp but unfortunately he struggled a bit according to reporters.

Jordan Love’s first crack at the 2-minute drill (that we’ve seen) barely gets past midfield and ends with him skying a pass over wide-open Malik Taylor’s head on fourth-and-7 from the plus-46.

Jordan Love struggled with accuracy during team work today. The arm strength is there, but missed a handful of makeable throws. Period ends with Blake Bortles finding Isaac Nauta deep down the left sideline for a TD.

Notes from Minicamp practice No. 1

* Davante Adams was present but did very little.

* Jaire Alexander with a big PBU (what else is new).

“He needs every rep he can get right now. He’s a young quarterback that was not afforded a preseason last year. Give him as many as he can handle. I just think every rep he takes is so valuable and he can learning something from the good and the bad.”

While LaFleur took a level-headed approach to Love’s performance, Packers fans weren’t as a patient.

Trade his ass and get our MVP back already

Its fine, it's 1 drill. He'll get better and better. He's gonna prove all the haters wrong pic.twitter.com/0wCQcNuZAX