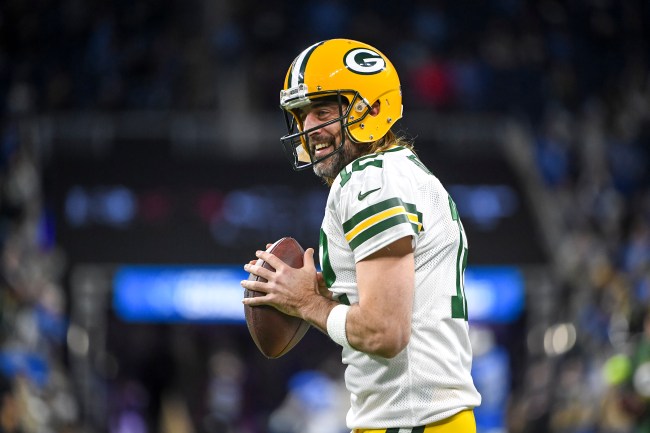 You’d think Aaron Rodgers would have better things to focus on right now than the New York Giants. The Green Bay Packers are once again chasing a Super Bowl after falling short in the NFC Championship in back to back years.

This year they are doing it as the NFC’s top seed and it seems Aaron Rodgers is spending his extra week off entertaining himself with the futility of one of the league’s worst teams.

Rodgers was asked about the ending to Sunday’s Raiders-Chargers game on “The Pat McAfee Show” and somehow turned it into an opportunity to take a shot at the Giants.

"You play to win the game.. nobody wants to be part of kneeling the shit out to take a tie. You know what would make me lose my mind almost as much as that.. goal line personnel & a QB sneak on 3rd & 9 on the -5" 😂😂 ~@AaronRodgers12#PatMcAfeeShowLIVE pic.twitter.com/dGsHzySZ2X

It’s not a surprising sentiment from a competitor like Aaron Rodgers and it would seem that just about all of the football world would agree with him. The Giants were widely mocked for the play call and it had many questioning how they could continue to employ Joe Judge as their head coach.

For now, the Green Bay Packers are just waiting to see who they will draw in the Divisional Round of the playoffs. They know that they will face the worst remaining team in the NFC and host them at Lambeau Field.

Whoever it is that they end up playing, Matt LaFleur better keep the 3rd and 9 QB sneaks out of the gameplan.