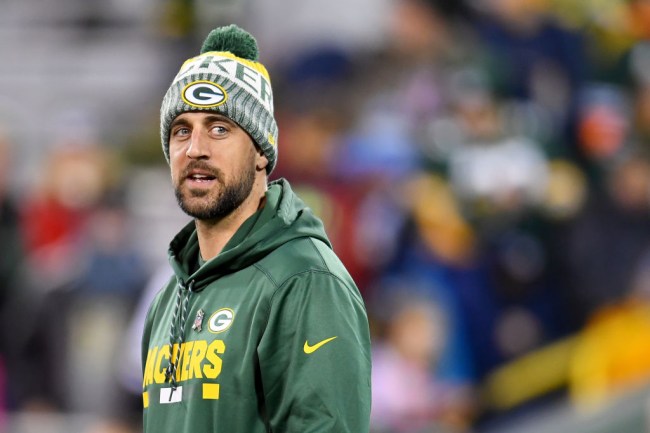 I’m not sure you’re aware of this, but people are absolutely obsessed with arguing and floating their own opinions out there, hell, it’s what makes America, America. We also love to watch talking heads argue with one another, spew out bizarre hot takes and react to clickbaity titles and the same is true when it comes to the sports media world.

From the ‘First Take’s’ of the world, local sports radio and everything in-between, the more off the wall takes some people throw out there, the more traction that specific idea can gain and before you know it the entire internet is talking about it.

One man that has received his fair share of criticism from the media is Aaron Rodgers. It comes with the territory of being one of the best quarterbacks in the NFL, but it’s hard to argue against the fact that he’s been under a rather aggressive microscope over the last handful of years.

Speaking with Kyle Brandt on his podcast, Rodgers decided to change roles, and instead of being the criticized he became the critic and blasted the hot-take sports media and clickbaity world we’re living in these days.

“What I laugh at and do not spend any time watching, but unfortunately, it’s usually ESPN’s on here, the [NFL] Network’s on over there in our cafeteria, it’s just four guys, four men or four women, however it shakes out, and everybody’s trying to say the most outlandish thing possible to get the most clickbait. And I’ve said it many times about click bait, is that my problem with putting ridiculous headlines on the story is that in this culture where the attention span is so short for so many people, even people probably listening to this interview or watching this who can’t stay on the entire time because they have other things to do and other things to look at on their phone.

“All they’re gonna read is eight words on ESPN’s front page and that’s what these people are trying to get people to click on. If they get one second on that page, that counts as a page view. And the more page views you get, the more ad revenue you get.

“And I think it’s really low-class journalism. Some of the headlines that get put on some of these articles that have nothing to do with what’s actually, content-wise, in the article. I think it’s poor journalism.

Nothing Rodgers said was wrong. You can lie to yourself all you want and think that our attention spans as humans haven’t completely shrunk over the last 20+ years, but they most definitely have, especially since social media burst onto the scene and took over our lives completely.

Rodgers appears to have lost a few fucks to give since reportedly calling it quits with Danica Patrick.