Abraham Ancer Didn’t Call Out Tiger Woods, He Simply Wanted A Chance To Take On The GOAT, Which Is Totally Normal 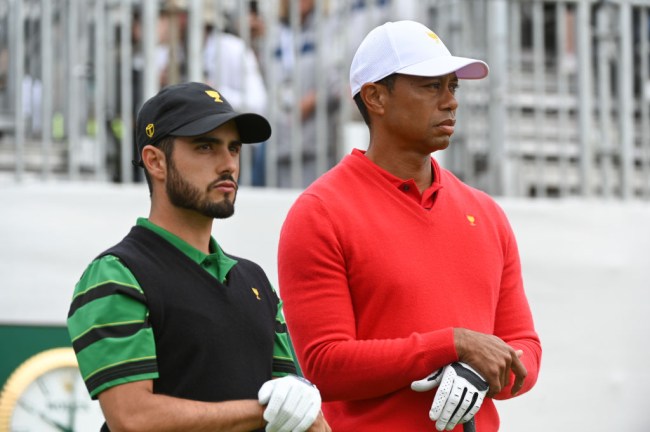 Well, he got what he asked for and took on Tiger Woods in the opening match of singles and was bested 3&2.

After he ended the match, in some seriously awesome fashion nonetheless, Woods was quick to say ‘Abe wanted it, he got it.’ It’s not like Woods needed any sort of bulletin board material, but it’s pretty clear that Ancer’s comments were in the back of his mind leading up to the match.

As one would imagine, golf Twitter was quick to take note of Woods’ comments following the match and started to troll Ancer.

Tiger said “Abe wanted it, and he got it.” Tiger is just a cold blooded killer lol pic.twitter.com/p1VDqxGTfy

“Abe wanted it and he got it.” Tiger doesn’t miss a thing. I mean, nothing gets by him.

It’s easy to pick on Ancer for saying he wanted to take on Woods, but then again, what player wouldn’t want a chance to take on Woods head-to-head? It’s not like the chance to play against Woods mano y mano comes around all the time, plus, Woods is almost 44-years-old so who knows how many of these team events he has left to play in.

Following the match Ancer cleared the air a bit and explained the context behind his quote about wanting to take on Woods; he simply wanted the experience of playing against one of the best to ever do it.

“When they asked me that at Mayakoba, first of all that question was in Spanish, so the tone when I said it, it was never like cocky or challenging or anything like that,” Ancer stated. “At the moment I thought it would be a great experience, which it was. No matter what, with the outcome of the match, I would have gained a lot. I would have become a better player just from being in that situation.”

This all sounds totally normal to me. Ancer is 28-years-old trying to burst onto the scene and getting to play Woods, and possibly beating him straight up, sounds like a pretty good way to do that. Ancer, who is ranked 38th in the world, had a great week at the Presidents Cup going 3-1-1 against the Americans.