Why So Serie A? BroBible’s Serie A Weekend Preview – The Milan Derby 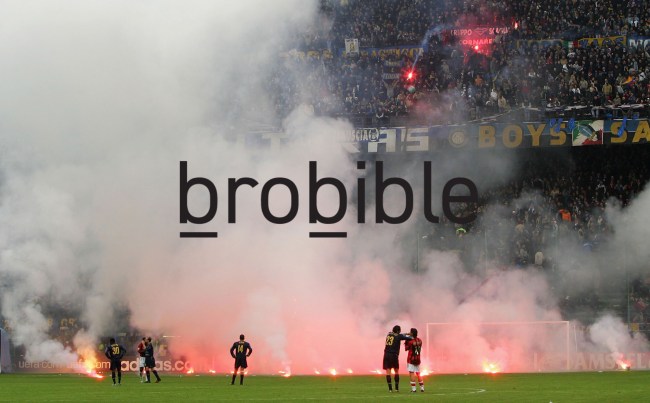 This weekend’s premier matchup features one of world football’s most heated rivalries as AC Milan takes on Inter Milan in the iconic Milan Derby, which will be airing exclusively on ESPN+ in the states.

Folks, I don’t want to jinx myself here, but our Why So Serie A picks are 2-0 so far this year (we took Juventus over Napoli, and then picked the draw when the Old Lady visited Fiorentina last weekend).

So, you can take that one of two ways: it means we’re either one dub away from an official hot streak orrrr we’re due for a loss. Either way, here we go, on to this weekend’s pick.

The Milan Derby is one of the fiercest rivalries in the world of football. Don’t believe me? Direct your eyes upward to the lead image of this article. You’re not seeing shit like that when Manchester City visits Manchester United, I can promise you that.

Despite the fact that AC Milan — who finished fifth in Serie A last season — is technically the home side in this matchup, that shouldn’t have as much of an impact on the proceedings, as — similar to the Jets and Giants — AC and Inter share the iconic San Siro.

While AC has won two of their first three games of the year, they haven’t looked particularly impressive, as they’ve only scored two goals so far this year. As for Inter, they currently sit atop the Serie A table with three wins in three games, scoring seven goals and conceding just one.

Luckily for AC, though, they’ve had an entire week to prepare for the match, while Inter is coming off of a grueling midweek trip to the Czech Republic to take on SK Slavia Prague in the Champions League.

AC Milan should have also had a midweek game — as a fifth-place finish normally results in a Europa League appearance — but a European ban for financial fair play has left AC on the outside looking in.

Normally, if all was level, I’d say to take Inter Milan, especially now that former Serie A and Premier League champion manager Antonio Conte is at the helm. But with Inter’s midweek slog to Eastern Europe and the always intense nature of Milan derbies, we’re going to take a draw here.

If you’re feeling frisky, you can take the Inter Milan win and then throw a little bit on the draw as insurance to cover your potential losses, as I just don’t see Inter — who are the superior side — outright losing this game.