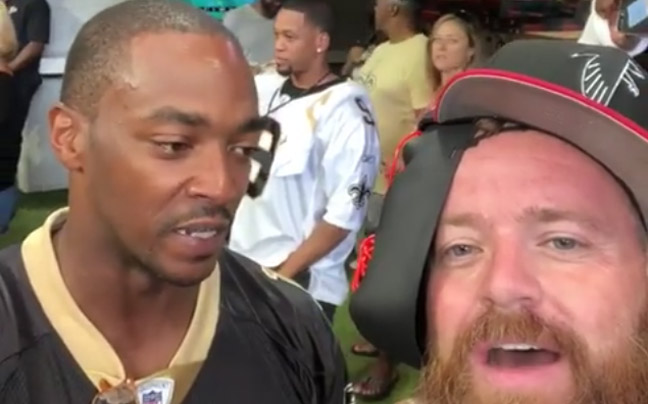 Avengers actor and devoted New Orleans Saints fan Anthony Mackie was on the sideline for the big division rival game versus the Falcons at Mercedes-Benz Stadium on Sunday.

Mackie is such a diehard member of Who Dat Nation that at one point he was booted from his prime season seats for being too rowdy and getting ratted on by some nuns.

So, yeah, he probably isn’t the best guy to start talking trash to about the Saints. Especially if you are a loud-mouthed Atlanta Falcons fan.

After trying to ignore the instigator, Mackie finally gave up and fired back with some A+ trash talk of his own.

The Falcons and Saints rivalry is one of best in sports. Avengers actor Anthony Mackie was heated. 😂😂 pic.twitter.com/NiErw01gNA

Mackie ended up getting the last laugh as his Saints beat the Falcons with an incredible drive to win the game 43-37 in overtime.

And yes, it was not lost on anyone that “Falcon” of the Avengers is a gigantic fan of the Saints.

A Falcon supports the Saints?

According to Deadline, the born-and bred in New Orleans Mackie is in talks to play a paramedic for his next role, a paramedic who works in New Orleans. Perhaps as part of his training for the role he can learn how to apply some salve to the next bloviating fan that he burns after he tries talking trash to him about his Saints.