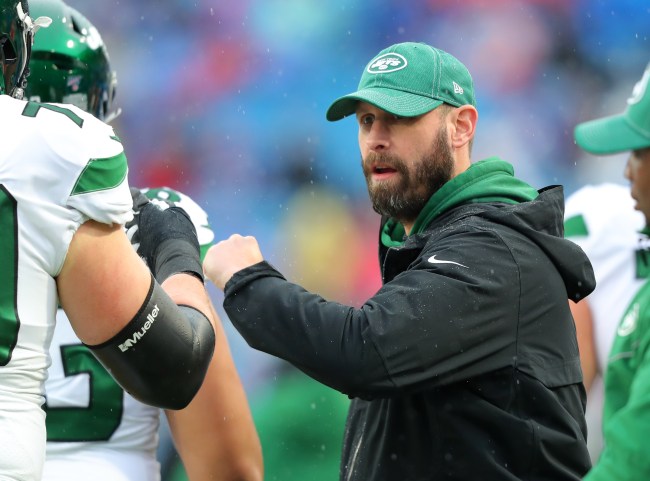 Adam Gase and the New York Jets are atrocious, with the team looking absolutely miserable during its 27-17 loss to the Buffalo Bills during Week 1 of the NFL season. While the 10-point deficit isn’t so bad, it’s the way that the Jets lost that, once again, feels like a serious punch to the gut of the team’s fans.

One of those supports happens to be ESPN’s Mike Greenberg, who, in the past, has openly talked about how the franchise is a walking embarrassment with Adam Gase as its head coach. Well, with a new football season brings new rants from Greeny — and he didn’t hold back about his opinion of Gase on Monday morning.

Talking about the lack of head coaching skills that Gase possesses, Greenberg even went as far as saying the dude would be over his head coaching at a fifth grade level, and continued to spew hate Gase’s way. Take a look below at the impassioned rant from the longtime ESPN personality.

“Adam Gase IS the problem with the Jets!”@Espngreeny was FIRED UP this morning over how terrible the Jets looked yesterday. #KJZ #Greeny pic.twitter.com/CUP6WcyzQv

Now, this would normally be the point where I brush off this type of shit from a guy (Mike Greenberg) who’s part of the media and gets paid to give his opinions on these types of matters. However, Greeny’s opinion comes from a serious place: his fanaticism, meaning it’s less about getting headlines and more about the truth. Something tells me a bunch of New York Jets fans agree.

Say what you want to about Gase’s past — which included coaching the legendary Peyton Manning, something Greenberg referenced in his rant — but the guy seems to be way over his head in New York. Whether it’s the players on the roster, the lack of scheme or foundation, or just the fact that, point blank, he’s not a very good head football coach, something needs to change if the team wants to take a step forward.

Remember, this is the same Adam Gase who bashed his running back, Le’Veon Bell, last season — who, by the way, got hurt on Sunday and was then (regrettably) put back out there by his head coach — so it’s not like the players in the locker room even seem to trust him much. If that’s the case and it’s only Week 1, imagine how fucked up the Jets will be in a couple months once both sides really get to see how dysfunctional one another is. Sounds like another long season in New York.