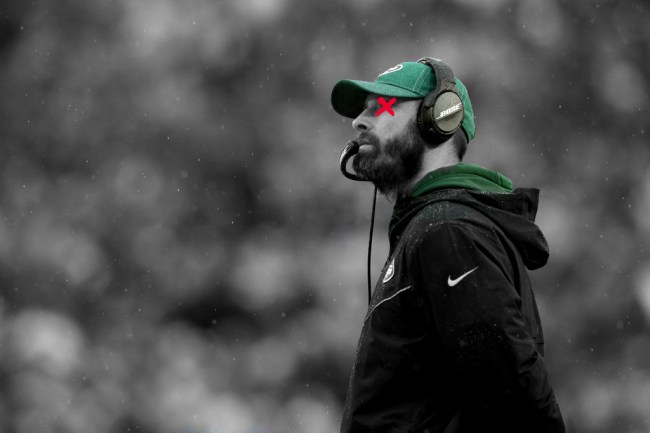 I’ve witnesses some truly, deeply awful teams in my lifetime. As a New York Jets and New York Mets fan, that’s pretty much par for the course. Truth be told, losing doesn’t necessarily bother me, because at the end of the year, every team except one ultimately arrives at that feeling, albeit some sooner than others. Plus, I’m a Liverpool fan, which has significantly sweetened the sourness of my New York-based franchises over the last few years.

But what I absolutely cannot tolerate, more so than losing or general incompetence, is a seeming lack of respect, a disregard for the fanbase. The New York Jets haven’t made the postseason in a decade and, believe it or not, that’s actually one of their more tolerable sins, as it pales in comparison to the decision to keep Adam Gase around for the entirety of the 2020 season.

Not only has Gase — a man who never deserved the job in the first place — continued to collect a paycheck and roam an NFL sideline for the entire season, and not only has he effectively ruined the future of former widely-touted quarterback prospect Sam Darnold through a combination of inept coaching and borderline sociopathic personality traits, and not only has he brought the franchise to the lowest depths of embarrassment that I’ve seen during my 20-year fandom, but now he’s completed his destruction of the Jets by eeking out a meaningless victory against the Los Angeles Rams that corrupts the future of the franchise until long after he leaves.

To the uninitiated, the gut reaction may be to blame Gase. He is, after all, the head coach of the team. But as President Truman once asserted that the buck stopped with him, the same can be said about the New York Jets ownership, who kept Gase around this long to begin with.

The job of a football coach is to win games, regardless of the context. It can be preseason or postseason, Week 1 or the Super Bowl: the objective of an NFL coach is to win. So why — WHY — would the New York Jets, clearly knowing that Adam Gase is not the future of his franchise, allow him to keep his job, the job of winning football games?

If New York Jets ownership truly cared about the future or the fans, they would’ve fired Gase after Week 6 and installed an internal yes-man whose priorities were solely to acquire the #1 pick in next year’s NFL Draft, which will likely yield Clemson quarterback Trevor Lawrence, whose considered to be the next Peyton Manning/Andrew Luck Can’t-Miss prospect.

Instead, the underqualified and in-over-his-head Gase kept his job (his job of winning football games), resulting in both the enragement of present days fans and ruining the prospects of future ones, if there are any. Gase was able to deliver one last franchise-destiny-altering screwjob on his way out and the New York Jets owners let him. So long as the Johnsons — who do not remotely care about their fanbase —  own this football team, their destiny, Trevor Lawrence or not, will remain the same: damned. And until the day comes where that changes, you can find me on the blue side of the Meadowlands, because I am done with the New York Jets.