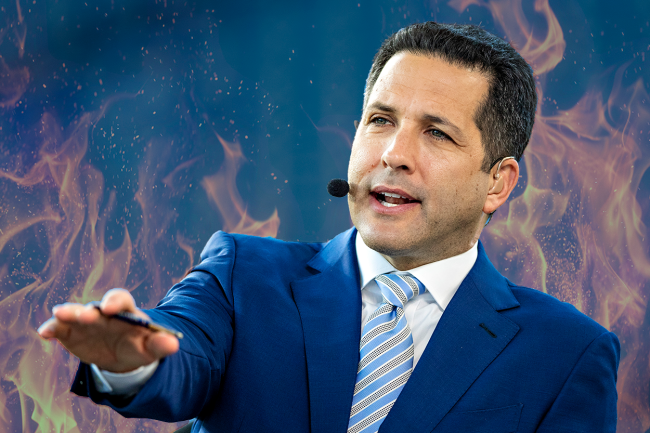 Adam Schefter is getting absolutely shredded for a recent tweet about the NFL Draft. The 55-year-old insider and analyst tweeted about a particular player’s draft stock and cited said player’s agent.

Every year, it seems like there is one surprise NFL Draft prospect who sneaks his way into the backend of the first round. Nobody sees the pick coming, it typically comes with a lot of criticism, and the franchise who made the pick is usually forced to explain itself to the masses.

This year, it appears as though one NFL agent is trying to manufacture that move himself. There is always a chance that Schefter’s report is true, but the way in which he reported it is raising quite a bit of scrutiny.

On Wednesday night, one day prior to the NFL Draft, Schefter tweeted that USC defensive end Drake Jackson might find his way into the first round.

His basis for that claim came from the agent that is representing Jackson as a client. So he tweeted that an agent told him that the agent’s client was generating a lot of buzz. Totally normal, totally unbiased.

Each year, unexpected players sneak into round one. One possibility this year is USC pass rusher Drake Jackson, whose agent Drew Rosenhaus said that “multiple teams” predicted to him Wednesday that Jackson – who had 15 top 30 visits – “would be a surprise first-round pick.”

As things currently stand, the vast majority of NFL Draft analysts project that Jackson will be selected in the mid-to-late second round.

Again, there is always the possibility that he sneaks into the first round. Schefter and Jackson’s agent could be right. However, the way that Schefter phrased his tweet makes it sound like Rosenhaus fed him what to say in an effort to make teams scramble over his client and think that they need to draft him higher than they may have thought.

It was a very weird tweet about Drake Jackson and Adam Schefter proceeded to get flambéed in the comments section.

i was really wondering what drew rosenhaus thought about one of his clients, thanks for reporting the news

Wonder how much of a bag Schefty got for tweeting this. https://t.co/bMGDthMUSv

So does Drew write out the tweet for you and you just copy and paste from the text or do you write these yourself?

Completely reliable source who has nothing to gain but creating artificial hype for his client, I believe this is 100% true

You should really just be quoting the entire tweet since it’s copy and pasted.

Sup Drew. Sign me. I sell patio furniture. Together we will rule Midwest decks as far as the eye can see!

his agent is a good unbiased source. i believe it

Well surely his agent wouldn’t be using you to drum up interest in his client, so this seems legit.

It isn’t unexpected now that you told us, Adam.

If Jackson goes in the first round, Schefter and Rosenhaus will have the last laugh. But that’s a big “if” and it’s still a weird thing to post either way.