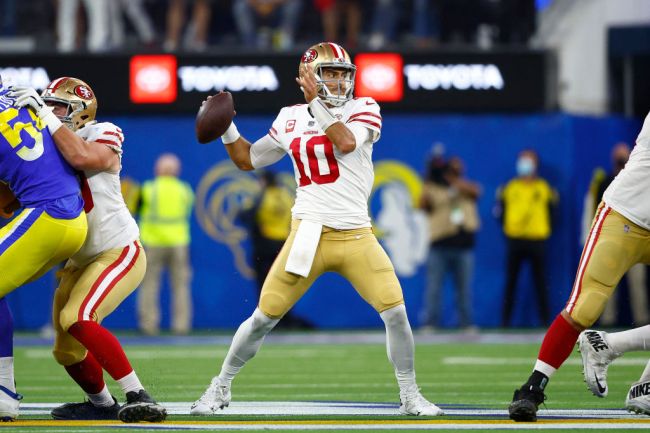 It seemed like a done deal. Absolutely everything we’ve heard since the San Francisco 49ers were eliminated from the NFL playoffs led us to believe that we had seen Jimmy Garoppolo’s last game in a 9ers uniform.

It also makes a ton of sense for the 49ers to move on from Jimmy G this offseason. They spent the 3rd overall pick of last year’s draft on Trey Lance. They let him sit behind Garoppolo for most of this season, but it seems unlikely that they want to let him spend much more time on the bench after spending that kind of draft capital on him.

In spite of all of that, Adam Schefter still thinks there’s the possibility that we could see Garoppolo back in San Francisco next season. In an appearance on the “Ari Meirov NFL Show”, Schefter said it’s not a lock that we see a deal done for Jimmy G this offseason.

Is Jimmy Garoppolo a lock to be traded this offseason? @AdamSchefter says not so fast…

The San Francisco 49ers keeping Garoppolo around for another season would be very surprising. Keeping him around would essentially guarantee Trey Lance spends another year on the bench. We’ve also seemingly already seen their ceiling with Garoppolo and it’s not what they want it to be.

The 9ers also run the risk of losing Garoppolo for free after next season when they could probably land at least a 2nd rounder for him right now. Maybe they believe that Lance needs another year to be ready to take over the team, but it’s not a great look to let the number 3 pick sit on the bench for 2 years when so many other QBs from his class are already starting.

It seemed like Garoppolo had one foot out the door already, but maybe we’ll see another year of him in San Francisco as Trey Lance continues to develop.